Antiphospholipid syndrome diagnosis can be hard to handle, especially if you know nothing about the condition. Find out all about it!

The presence of multiple thrombosis or recurrent spontaneous abortions should lead to suspicion of antiphospholipid syndrome. What should you know about this disease?

Antiphospholipid syndrome occurs when the immune system creates antibodies that attack the same tissues in the body (autoantibodies). As a result, blood clots form in the arteries and veins, preventing proper blood flow. This derives symptoms associated with decreased or obstructed flow.

In particular, it usually manifests itself with episodes of thrombosis and repeated spontaneous abortions. Unfortunately, there is no specific cure for this syndrome. Still, there are several medications available that reduce clot formation and other associated complications. Do you want to know more about it? Keep reading!

Antiphospholipid syndrome can occur due to an underlying disease, such as an autoimmune disorder. However, there are cases in which this cause does not exist. It is possible that it has an associated genetic component, as is the case with most autoimmune diseases.

Systemic lupus erythematosus is the condition most associated with its appearance. However, other conditions also increase the risk of blood clots caused by autoantibodies. Among these, the following stand out:

How is the antiphospholipid syndrome diagnosis made?

Diagnosis is made by serological measurement of autoantibodies. These must appear at least twice in a row in the blood in tests done 12 or more weeks apart.

The clinical manifestations of this syndrome depend on where the blood clots are lodged. Complications include the following:

How do autoantibodies cause thromboembolism?

The autoantibodies present in the antiphospholipid syndrome act —as their name indicates— against their own tissues. Thus, they increase the risk of the formation of blood clots due to cell damage in the blood vessels.

However, thrombosis does not usually occur in the absence of other conditions that favor coagulation, such as prolonged inactivity, prostration, pregnancy, or recent surgery. Other risk factors are the following:

Thrombosis in antiphospholipid syndrome can occur at any point in the cardiovascular system. In this way, it can affect any organ in the body. The symptoms will depend on where it occurs.

In addition, there are other conditions, such as a decrease in the number of platelets (thrombocytopenia). This is due to the amount of blood cells that are used in the production of clots. This increases the chances of bleeding, especially in the nose and gums.

It is also possible to experience marbled skin (skin with “spots” or livedo reticularis) and skin ulcers.

Clinical manifestations according to the affected organs

Renal failure due to thrombosis of large vessels or glomerular capillaries (thromboembolic microangiopathy).

Deep venous thrombosis. It manifests with pain, swelling and redness in the lower limbs.

Pulmonary embolism due to migration of a clot into the respiratory circulation. When a clot lodges in the lung, a sudden shortness of breath, chest pain, and coughing up blood happen.

Cerebrovascular disease or transient ischemic attack, which depends on the extent of the condition in the circulation of the central nervous system. It can present as paralysis or weakness in the face, arm, or leg; visual disturbances or slurred speech; and sudden, severe, generalized headache.

Cardiovascular disease due to obstruction of the coronary circulation (can cause heart attack). They can also lodge in the heart valves and travel through the bloodstream (arterial embolism), or damage and thicken them.

Other neurological conditions due to decreased blood flow. For example, migraine, seizures and chorea.

In pregnancy, complications range from repeated spontaneous abortions to intrauterine fetal death. In addition, it can cause preeclampsia (increased blood pressure with loss of protein in the urine), intrauterine growth restriction, and preterm delivery.

The treatment of antiphospholipid syndrome is based on preventing the formation of clots through the use of oral anticoagulant drugs (which thin the blood) or antiplatelets. In addition, risk factors associated with thrombosis should be addressed.

Doctors initially manage cases of acute thrombotic episodes with intravenous heparin, followed by oral anticoagulants (warfarin). The use of anticoagulants should be monitored with a blood test to reduce the risk of bleeding, either through a wound or under of the skin.

After treating the acute event, people with this syndrome should take oral anticoagulants to prevent recurrence of blood clots in the veins. To prevent arterial periods, doctors recommend antiplatelet drugs such as aspirin and clopidogrel.

In the case of pregnant women, it is possible to carry the pregnancy to term with proper control and use of medications. Treatment includes heparin or heparin with low-dose aspirin because doctors cannot give warfarin in these cases because it can affect the fetus.

Women of childbearing age who have antiphospholipid syndrome and want to conceive should also take low-dose aspirin.

What is there to remember?

The presence of one or more episodes of the formation of blood clots, or constant pregnancy loss (or another complication of pregnancy) that doctors cannot explain by another cause should raise suspicion of antiphospholipid syndrome.

Although there is no specific cure, doctors can control the symptoms. It is even possible to carry a pregnancy to term. For this reason, in case of suspicion, it is better to promptly consult a rheumatologist.

Don’t forget to SHARE everything you know about antiphospholipid syndrome diagnosis with your friends and family on your social networks! 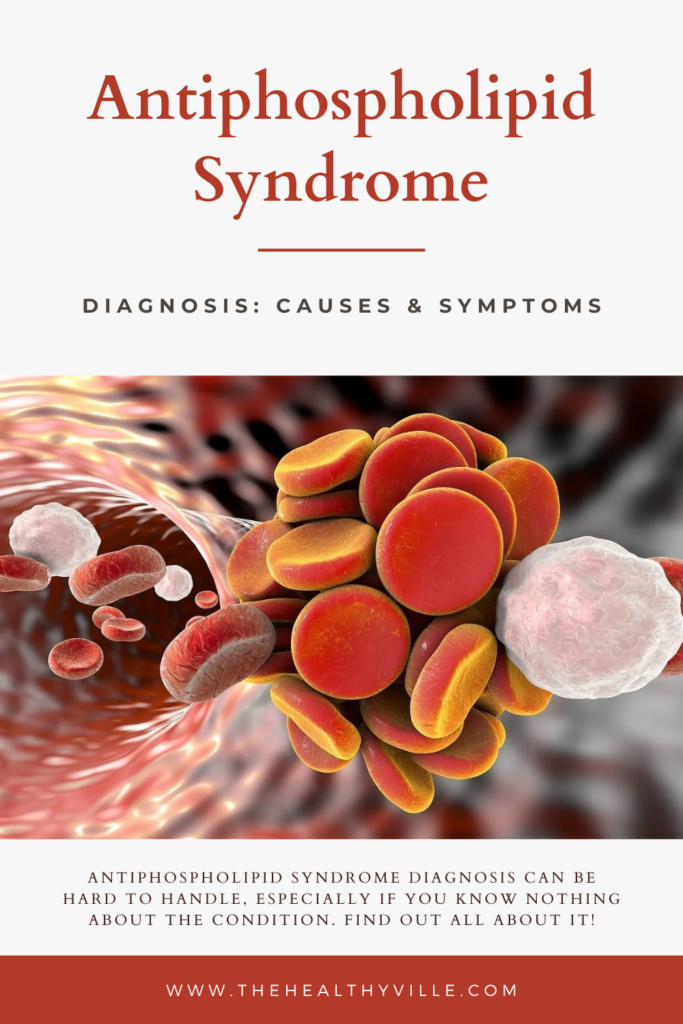