Home Health Bad Side Effects of Birth Control: 9 Most Common Ones

The bad side effects of birth control in some women can be very disabling. We will explain to use which the most common are.

Contraceptive side effects are not unusual. Although they are used to prevent unwanted pregnancies, they are still drugs, in some cases, or instruments in others. Thanks to scientific advances, different types have been developed that adapt to the conditions of each woman.

However, most are based on the administration of hormones. Therefore, they tend to have adverse reactions that vary depending on the person. In this article we explain why they occur and which are the most frequent.

Why do bad side effects of birth control appear?

Hormonal contraceptives are, today, the most effective method of controlling fertility. In addition, they are the most used by women, along with condoms. Within the group we find the following:

The fact is that bad side effects of birth control are due to the administration of exogenous hormones. In general, the menstrual cycle and everything related to female fertility is regulated by estrogens and progesterone.

When exogenous hormones are introduced into the body, the synthesis of natural ones is disrupted. In this way, the menstrual cycle and ovulation stop following their normal course, which is why a pregnancy is prevented.

The problem is that hormones not only act on the reproductive system. They also exert their action on other parts of the body, such as the breasts and adipose tissue. Hence, they may have more effects, apart from interfering with fertility.

Intermenstrual bleeding as an adverse effect of contraceptives is one that appears unexpectedly between two periods. According to research, this secondary reaction is frequent when starting to take the pill and, in addition, it is a cause of detachment from the method, so it causes its abandonment in many opportunities.

It is likely to appear during adaptation to hormonal imbalance. However, if the bleeding becomes very heavy or lasts for more than five days, the ideal is to consult the doctor to rule out other causes.

Dizziness, nausea, and vomiting are very unspecific symptoms. They can appear for many reasons, but it has been described that there are women who also suffer from them when starting the hormonal method.

However, it is important to bear in mind that, in the event that the contraceptive is taken orally, vomiting can interfere with its absorption. Therefore, it is essential to be well informed about whether to repeat the dose. As a general rule, when the episode occurs before 12 hours after ingestion, it should be repeated.

As we mentioned at the beginning, hormones also act on breast tissue. Hence, they can cause the breasts to be more swollen or sensitive. Many women even claim to feel pain to the touch, as explained in the Revista de gynecología y obstetricia de México.

This is one of the most relevant side effects for some female users. In the event that a person suffers from migraine, it is usually recommended to avoid hormonal contraceptives and look for alternatives, since there is some evidence that denotes the link.

The reason, as the Mayo Clinic describes, is that fluctuating estrogen levels alter certain chemicals related to this symptom. Therefore, the ideal is to prevent pain in some phases of the cycle or, if they are very disabling, avoid this type of method.

Weight gain is one of the most controversial side effects. It seems that there is no increase in body mass as such. That is, it would not be the fat tissue the culprit.

Most likely, there can be fluid retention, especially at the start of use, which is why it is an adverse effect of starting contraceptives. Over time, the internal electrolyte balance stabilizes and there is no longer retention.

As explained in the package inserts for birth control pills, some women experience changes in mood. That is, they tend to be more unstable in their emotions or have a higher risk of depression.

However, the relationship between the two events is still being studied. The investigations that we have agree that the effect is not very measurable and, when it could be verified, it appeared after more than 10 years of use of the pills.

Amenorrhea, like breakthrough bleeding, is a common symptom. Its name implies lack of menstruation at the time it should happen. In the case of hormonal contraceptives, it is a secondary form, since it is related to the imbalance of the cycle.

The truth is that many factors can influence and not just the pills. Stress or diet itself, as well as physical exercise, are determining factors. However, it is important that, if this happens, you carry out a pregnancy test to make sure.

Sexual desire is a sensation on which many conditions intervene. Hormones play a fundamental role, but they are not the only determining factor. However, it is possible that with contraceptives there is a decrease in libido.

According to an article in the Medical Journal of the Mexican Institute of Social Security, the reduction of sexual desire is more evident in the patch and implant methods than in the others. In any case, it is difficult to separate the other factors that could intervene to have a final opinion.

When it comes to hormones, one of the side effects of contraception will be the change in vaginal discharge. This fluid responds to internal variations and the conformation of the flora of the vagina.

This change is almost never a sign of pathology. Expectations are that the change will happen and that it will be continue during the use of pills or injectables.

Hormonal contraceptives are a safe and effective method of preventing pregnancy. However, this does not mean that they are exempt from possible unwanted effects.

Therefore, you should always consult with your doctor all doubts. Professionals will help you choose the most suitable one for you and will advise you based on your situation. Each woman has the power to choose what best suits her lifestyle and the least complications associated with it.

Don’t forget to SHARE the bad side effects of birth control with your friends and family on your social networks! 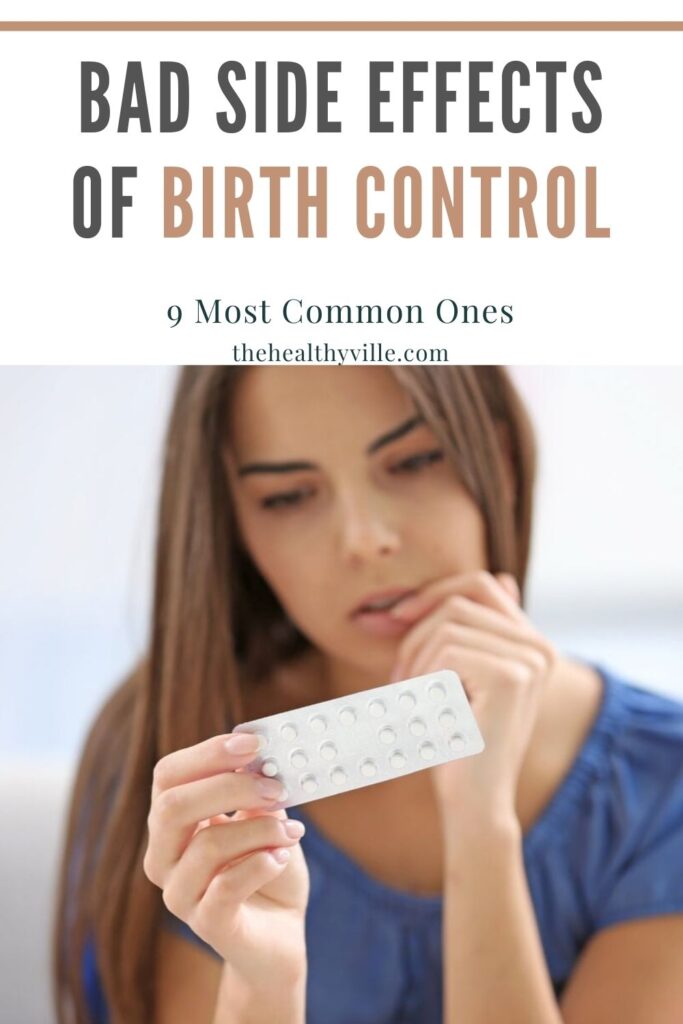 Mycosis Fungoides Rash – What Is It? Is It Dangerous?

How to Get a Bruise to Heal Fast Using Natural Remedies?