Black spots on gums you may make you feel alarmed and concerned. We’ll tell you why this oral tissue can darken and what causes it.

You may be scared if when you brush your teeth you notice that you have black spots on your gums. This darkening not only affects the aesthetics of the smile, but can also indicate that something is not right with your oral health.

The gingival tissue that covers the teeth is usually seen as pale pink. But just like skin, hair and teeth, each person has their own coloration.

The presence of black spots on gums can be due to different causes. And most of the time these are harmless situations. Although to be sure that they are not harmful, it is best to consult with the dentist and evaluate the problem.

The gums are a soft and fibrous tissue that surrounds the neck of the teeth. They protect and cover the alveolar bone in the root zone of the teeth.

Together with the bone tissue and the periodontal ligament they constitute the periodontium. That is, it is part of the structures responsible for supporting and keeping the teeth in place.

When the gums are healthy they appear pale pink, uniform and with a dotted texture similar to orange peel. They are firm and their defined edges surround the neck of the teeth.

But as we mentioned, this coloration can vary from one person to another. Well, like the skin, this tissue has melanocytes, which are the cells responsible for the coloration of the epithelia.

Sometimes, the coloration of the gingival tissue is altered and it is necessary to pay attention to it. Well, these changes in the appearance of the gums may indicate that there is an oral health problem that must be resolved.

Black spots on gums can appear as a result of having suffered a trauma in the area. Well, like any other part of the body, the gingival tissue can be injured.

Hitting your mouth, falling on your face, eating something with sharp edges, or even brushing your teeth too violently or forcefully can cause bruising of the gums. Bruises appear dark red or purple, but over time they turn dark brown or black.

If the black spots on gums are due to the presence of a bruise, there may also be slight pain in the area and bleeding.

Bruising usually resolves on its own within a few days without the need for any medical treatment. Although if the bruise persists over time and does not disappear, it is advisable to consult the dentist.

Likewise, if many bruises appear in different parts of the body without an apparent cause, it is appropriate to consult. Well, they can be a symptom of a problem in the blood.

When a dental element is about to come out, a fluid-filled cyst can form on the gum. This happens because the dental crown fails to break the gingival mucosa and come out properly.

Sometimes the accumulated liquid has mixed blood that can give a purple or black color to the gingival tissue. When an eruption cyst has hematic content, it is called an eruption hematoma. This usually happens if the tumor has been injured by a blow or fall.

This type of process is common in childhood, during the eruption of milk and permanent teeth. They disappear by themselves once the tooth manages to erupt.

And in the event that your stay is prolonged and the tooth cannot come out by itself, the pediatric dentist can make a small incision on the gum, like a buttonhole, to facilitate the process.

As we told you when talking about the appearance of normal gums, each person has their own coloration in this tissue.

Thus, some patients have dark brown or black gums. This is due to a higher concentration of melanin on your gum tissue. This is melanoplakia and is harmless and normal.

These pigmentations can occur in any area of ​​the gum and are usually bilateral. They are asymptomatic and are more noticeable with increasing age. It is also common to observe them on the mucosa of the cheeks and lips.

Its manifestation is more frequent in certain ethnic groups, which is why they were formerly called racial spots or racial melanic pigmentation.

Its manifestation is more frequent in certain ethnic groups, which is why they were formerly called racial spots or racial melanic pigmentation.

On the other hand, melanotic macules are harmless spots similar to freckles. They can occur in different parts of the body, including the gums.

Melanotic macules are solitary, asymptomatic brown, bluish, or black spots. They are small, usually between 1 and 8 millimeters in diameter, and well circumscribed.

The cause of these lesions is unknown and some people are born with them. No treatment is necessary. Although when suspecting some other more serious pathology, the dentist may suggest performing a biopsy

Among the harmful habits for oral health, smoking is one of the most harmful. This custom not only stains the teeth. Heat and toxins damage the oral mucosa, which can cause serious pathologies.

People who have been smoking for several years often have black spots on their gums. Nicotine increases the production of melanin in the cells, giving rise to a dark gingival tissue. This is known as smoker’s melanosis.

The darkening of the mucous membranes can also be seen on the lips and cheeks. There is a link between the decrease in this dark pigmentation and the abandonment of the habit. Therefore, black spots on gums are considered reversible.

Black spots on gums due to amalgam occur after the patient has had a filling made with this material placed. Some particle of the fix can be lodged around the tooth.

Silver amalgam is a material used to seal and fill cavities in teeth. If it reaches the interior of the mucosa, it is capable of impregnating and coloring it. This can happen when making the filling or removing it with rotary instruments to replace it with resins.

The stains are usually located in the vicinity of the fixed tooth. And they are observed dark blue or black.

They are asymptomatic and permanent. They are not removed, because it is not necessary. But despite the fact that they are not serious, they can be an aesthetic nuisance if their location is very visible.

To avoid this type of black spots on the gums, it is pertinent for the dentist to use a rubber dam if he is going to place or remove amalgams. In this way, the soft tissues are isolated.

The use of certain medications

The intake of certain medications can have as a side effect the darkening of the gums. Combined-type oral contraceptives are the most common example.

Some antibiotics, antimalarials, antipsychotics and anticancer drugs can also cause black spots on the gums. Among these, chlorpromazine, minocycline and quinidine have shown this type of unwanted effect.

Gingivitis and periodontitis can also cause black spots on gums. It is not the most common, because most of the time the gingival tissue becomes inflamed and looks red and bleeding.

But when a lot of bacterial plaque accumulates and it calcifies, it becomes tartar. These calculi can be seen as dark in color and if they are deposited in the subgingival area (inside the free edge of the gum) they give the tissue a black appearance.

It is also possible that the gums appear temporarily black after receiving dental treatment in the area. After the placement of a gum graft to treat gingival resection, for example, the tissue will appear black for a few days, since a transitory necrosis is generated that will disappear as the area recovers.

Another periodontal problem that can cause black spots on the gums is acute necrotizing ulcerative gingivitis. This is a rare infection of the gum tissue that is also known as trench mouth.

It causes fever, bad breath and a lot of pain in the gums, whose papillae become necrotic and appear gray or black. Usually, it is the evolution of a previous gingivitis in which the bacteria proliferate very quickly and the tissue dies. It is associated with poor oral hygiene, an unhealthy diet, stress, lack of sleep or immune problems.

Its treatment consists of cleaning and periodontal instrumentation and the use of antibiotics. Oral hygiene and the use of mouthwashes also promote tissue recovery and prevent recurrence.

The blue nevus is a round and flat, or slightly raised, black or bluish mole located on the gum. It is like a freckle on the gum tissue.

The etiology is not clear and it usually develops during childhood or adolescence. They are more common in women.

In general, they do not need treatment, although it is pertinent to control them. If its size, shape or color changes, the doctor will order a biopsy to detect a possible malignant transformation.

Oral melanoacanthoma is a rare alteration. It causes the appearance of dark spots in different parts of the mouth, including the gums. They are harmless and usually appear in young people.

Its origin is unknown, although it seems to be related to injuries caused by chewing or friction in the mouth. They do not require any treatment. Although the similarity with other lesions warrants a biopsy to rule out more serious pathologies.

Oral cancer can also cause black spots on the gums. There are other symptoms associated with this pathology, such as open sores that do not heal, unusual bleeding, swelling, chronic sore throat or voice changes. Although it can also happen that the stain is the only manifestation.

To determine if a black spot is caused by cancer, the doctor will need to perform a biopsy. This can be supplemented with different imaging techniques. Such are a computed tomography or positron emission tomography (PET) scan. Especially to see if the cancer has spread to other parts of the body.

If the spot is malignant and the cancer has not spread, the doctor may remove it surgically. If it has spread, chemotherapy and radiation therapy will help kill the cancer cells.

Now that you know all about black spots on gums, make sure you spread the word. The more we raise awareness, the easier would be for people to spot the differences.

Don’t forget to SHARE why do black spots on gums appear with your friends and family on your social networks! 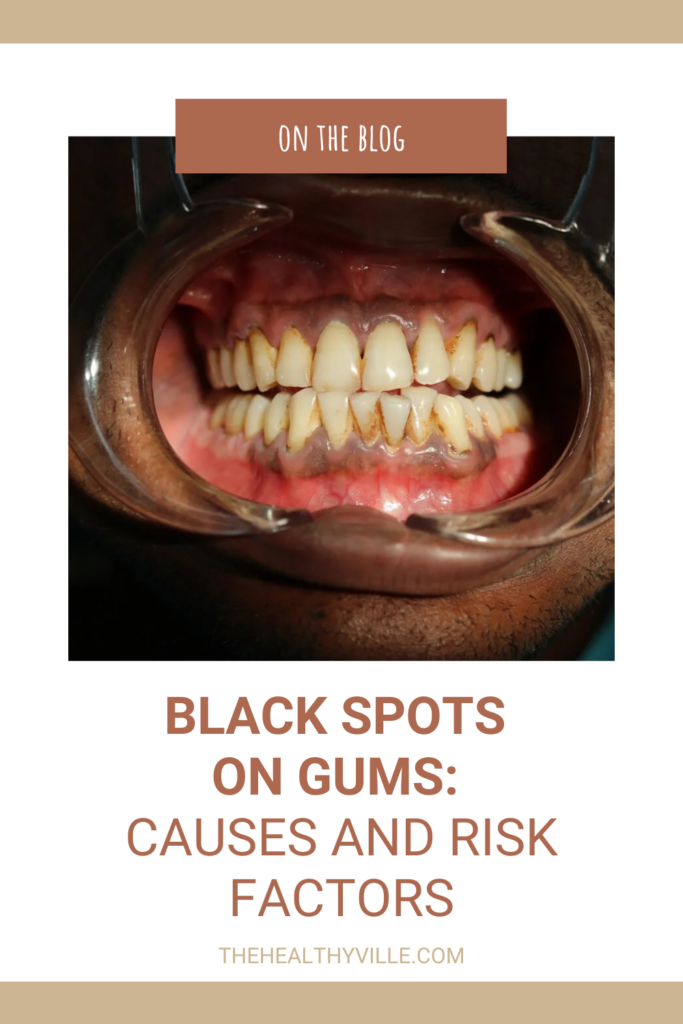