Campylobacter symptoms are the most common cause of diarrhea worldwide. From fever to abdominal discomfort, they manifest in multiple ways. Find out more!

Infections with the Campylobacter bacteria, also known as “campylobacteriosis”, are the most common cause of diarrhea worldwide, since according to studies they cause up to 14% of all these clinical pictures globally.

Beyond this, the World Health Organization (WHO) estimates that food-borne diseases – including campylobacteriosis – affect one in 10 people worldwide at any given time, which translates into in the loss of 33 million years of healthy life.

Naturally, in countries with poor health infrastructure, keeping the bacteria that causes these conditions can save lives in the long term. Therefore, today we tell you everything you need to know about Campylobacter infections.

What are Campylobacter infections?

First of all, it is necessary to emphasize that the term Campylobacter does not refer to a single species, but to a genus of bacillus-shaped bacteria that contains at least 12 species that are pathogenic for humans. The most common of all is C. jejuni, which causes up to 90% of infections.

This pathogen is one of the most common causes of diarrhea in the United States. It is estimated that around 2.4 million Americans suffer it annually, with more than 29 epidemiological outbreaks between 2013 and 2017.

In general, this infection is caused by ingesting unpasteurized milk or by eating raw or undercooked meat and poultry. According to the United States Department of Agriculture (USDA), an inoculation as small as 500 pathogenic cells from oral entry can cause infection in the person.

By a mechanism similar to that of non-typhoid salmonella, Campylobacter bacteria invade the cells of the small intestine, injure them, and disrupt fluid absorption.

In general, we can summarize the main sources of infection of the disease in the following:

The most common symptom of Campylobacter infection is diarrhea — sometimes bloody. This sign usually appears between 2 and 5 days after contact with the bacteria, and at 6 days, in general, it stops on its own. Other accessory symptoms include:

However, some infected patients never have clear symptoms. Also, death from campylobacteriosis is very rare. It is only seen in very young infants, the elderly, or immunocompromised patients, such as HIV carriers.

Diagnosis once symptoms appear is straightforward. The professionals will obtain a sample of the stool and, through a stool culture, will identify and isolate the bacteria that cause the gastrointestinal imbalance. You can also perform tests that identify the genome of the microorganism, which are faster.

According to the Centers for Disease Control and Prevention (CDC), Campylobacter infections usually resolve on their own after about 3 to 6 days after the first symptoms appear. Still, plenty of fluid intake is recommended to replenish electrolytes lost in diarrhea.

Drug administration is not usually recommendable in most cases for a simple reason: its excessive application can cause the appearance of resistant strains. For this reason, in this type of clinical picture, self-medication is never a good idea and doctors prescribe antibiotics only for the most serious cases.

How to prevent these infections?

As with most Foodborne Diseases (ETAs), the best prevention lies in the sanitation of the food that you’re going to consume. The CDC also shares some measures to consider. They cover the following:

As we have seen, Campylobacter infections are the leading cause of diarrhea. The C. jejuni species is the most widespread worldwide. Most epidemiological outbreaks occur due to the consumption of meat in poor condition, But also, due to the ingestion of unpasteurized milk, and untreated water.

Therefore, to combat campylobacteriosis, you better consume only food in a sanitized environment. This means always subject meats to high temperatures before consumption and, of course, wash your hands before cooking.

Don’t forget to SHARE the campylobacter symptoms, causes and treatment options with your friends and family on your social networks! 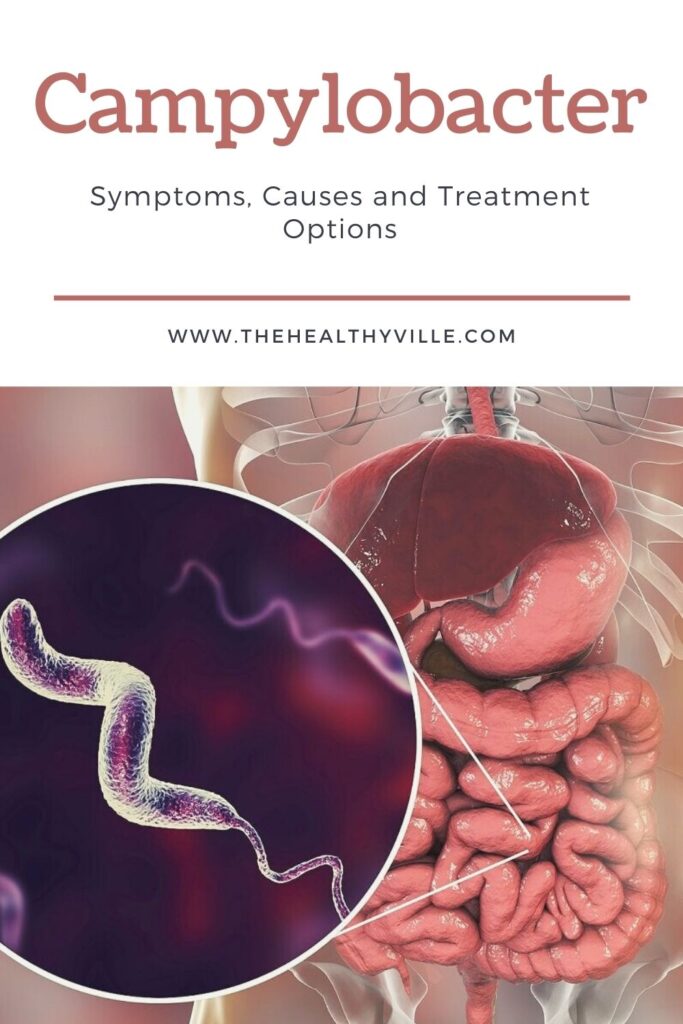