See how the central venous catheter could cause vascular perforation and lower the risk of mortality if you’re suffering from a cardiovascular disease.

Vascular perforation is an infrequent complication. Only 10% of the perforations take place in central veins, doctors are usually late with the correct diagnosis, contributing to a high risk of mortality.

Vascular perforation by central venous catheter occurs when the tip of the catheter is displaced. It can occur at any level and regardless of where the other end is located.

Doctors use ultrasound to evaluate and identify a suitable vein for catheter placement. It also allows the interventional radiologist to identify the appropriate veins.

Unlike the catheter doctors use in a standard intravenous line, a vascular access catheter is more durable, and does not become clogged or easily infected.

They design these catheters so that they extend into the larger central vein close to the heart. Catheters vary in size, length and number of channels, depending on the use for which they are designed. Here are the main types of vascular access catheters:

It is a long catheter that extends from a vein in the arm or leg, into the larger vein near the heart. These catheters are midline catheters when doctors place it in such a way that the tip of the catheter remains in a relatively large vein. However, it does not extend into the larger central vein.

The non-tunneled central catheter may have a larger caliber and is designed to be placed in a relatively large vein. In addition, this vein is more central, such as the jugular vein in the neck or the femoral vein in the groin.

It may have a cuff that stimulates the growth of tissue that helps keep it in place in the body. There are different sizes and types of tunneled catheters. The tunneled catheter is characteristic of its safety and easy access.

It is a permanent device consisting of a catheter with a small reservoir.

The placement of a central peripheral insertion catheter can result in serious complications. Among them is vascular perforation, therefore, the correct position of a central catheter must always be checked.

The diagnostic test of choice of vascular perforation at the central level is the computerized tomography with contrast. There are two types of risks in relation to vascular access catheters; those that occur during the performance and those that occur because the device is in the body. Some of these risks are:

Rarely, the catheter enters an artery instead of into a vein. If this happens, the catheter should be removed. Most of the time the artery then heals itself, but occasionally requires a surgical repair.

When doctors use a vascular access catheter, two types of late infection can occur: infection of the skin at the catheter insertion site or infection in the bloodstream.

When the catheter is not well attached to the skin there is a risk that it may accidentally come out. If this happens, doctors should apply pressure to the site of the incision with a sterile dressing.

In addition, any type of vascular access catheter can be clogged with a blood clot. Doctors treat the clot with a medication that dilutes the blood, but sometimes they need to remove the catheter.

On the other hand, in rare cases, patients experience an irregular heartbeat sensation. This sensation may be related to the catheter.

Don’t forget to SHARE what you’ve learned about the vascular perforation by central venous catheter with your friends and family on your social networks! 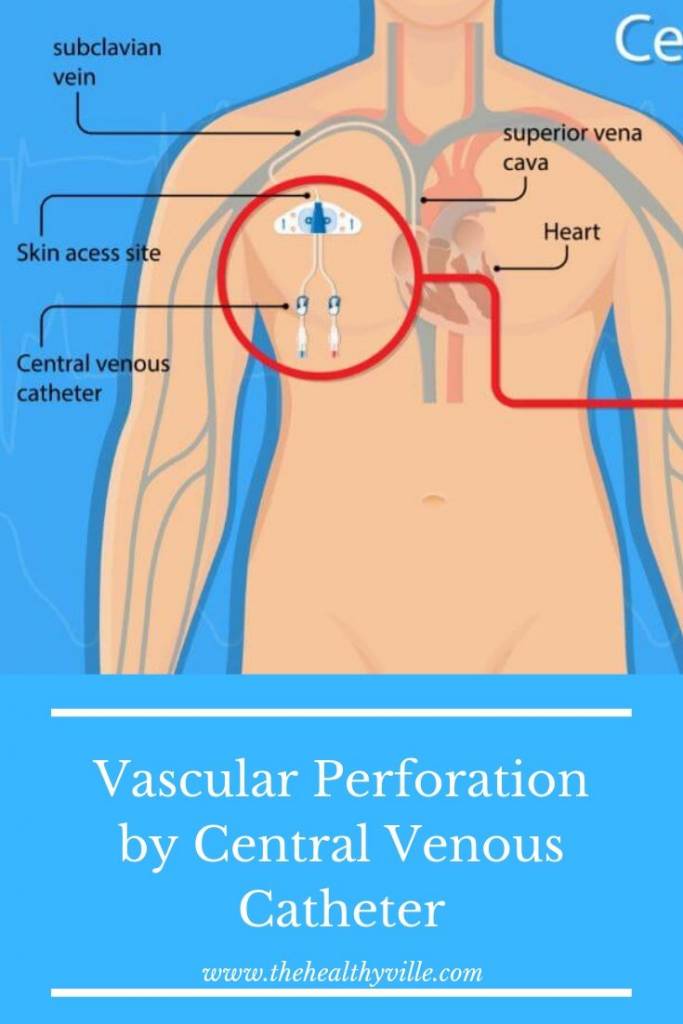