Knowing erythema multiforme causes will help you recognize its symptoms and start treating them on time. Learn everything you need to know!

Erythema multiforme is an immune disease. It is more common among young adults than in the rest of the population and its causes are not well understood. We tell you some things about this disease.

Also called polymorphic erythema, erythema multiforme is one of the many autoimmune pathologies that affect humans. It is characterized by recurring skin lesions that appear and disappear.

It has various forms of presentation, but we can summarize them in two: the minor and the major form. Among the former, there are no specific clinical entities, although there are among the larger ones, including, for example, Stevens-Johnson syndrome.

Erythema multiforme can appear at any age, but is most common in people in their 20s or 30s. In children it is a rare pathology, which is almost never detected. In numerical terms, the incidence is about five new patients per year for every million inhabitants.

The condition of erythema multiforme is concentrated on the skin. This turns out to be the organ most affected by the disease, with lesions that are distributed on the external part and on the internal mucosa.

The characteristic lesion is an erythema that can blister. Already within the classification of the blisters there is variety, since some patients have bullae and others have vesicles.

The erythema itself is a coloration that tends to red, in the form of a cockade, with concentric circles. When the disease was first discussed in the mid-1800s, doctors noted that cockades appeared symmetrically on either side of the body.

The mildest presentation of erythema multiforme occurs with small cockade injuries. They usually do not exceed 3 millimeters in diameter and the edge is thin and well defined. The limitation of the affected area is around 10% of the entire body surface.

The blisters are sometimes, not always. When they are active in the minor form, they tend to be placed in the center of the cockade. As well described by classical physicians, minor erythema multiforme is symmetrical.

The lesion that appears on one upper limb is mirrored on the other limb on the opposite side. The same is true of the face. Rosettes can be located inside the mouth, for example, invading the mucosa. If there are blisters in this wet region, they are usually similar to sores or canker sores.

This presentation of the pathology is more serious and with many more symptoms than the least. Although they disappear after 2 or 3 weeks from the start, the outbreaks are unpredictable.

On the skin, the symptoms resemble the smaller shape, with a larger diameter of the cockades and more body surface compromise. The characteristic is that the mucous membranes suffer too much.

The mouth is the area that guides the diagnosis. The tongue and the internal region of the cheeks are covered with spots and blisters covered above with a thin layer of fibrin, yellow or white color, easy to peel off. As the layer comes off, the injury is exposed, causing pain when eating or drinking fluids.

The etiology of the disease is unknown. It is known that it is an autoimmune pathology, but it is not clear how the body reacts and what it does. Since it is autoimmunity, it is assumed that an antigen triggers the formation of the lesions.

The researchers agree, for the most part, on the theory of the viral response. That is, the patient has increased susceptibility to certain microorganisms, usually viruses, and the immune system overreacts.

The viruses targeted as culprits are herpes simplex, coxsackie, adenovirus, and influenza. However, bacteria are not ruled out either; therefore, Mycoplasma pneumoniae and beta-hemolytic Streptococcus may be triggers.

For another group of researchers, erythema multiforme responds to immunocomplexes, which would open the door to its origin being metabolic, and not infectious. An alteration of cellular metabolism would stimulate white blood cells that would attack the epidermis, due to the effect of a medicine, for example.

Mild forms of erythema multiforme are addressed by treating the symptoms. Attempts to calm pain and discomfort with pain relievers. Some doctors prescribe corticosteroids for this, but there is discussion about its usefulness.

Antiviral drugs are an option. Acyclovir, for example, used in herpes, would be effective if the virus is the trigger. The same with flu medications.

In the most serious and generalized forms, the approach is not so easy. Cases with extensive bodily involvement can lead to a poor and unfavorable prognosis if outbreaks recur frequently. Here, the participation of a multidisciplinary team that guides the care protocol is required.

Don’t forget to SHARE the erythema multiforme causes, symptoms and treatment options with your friends and family on your social networks! 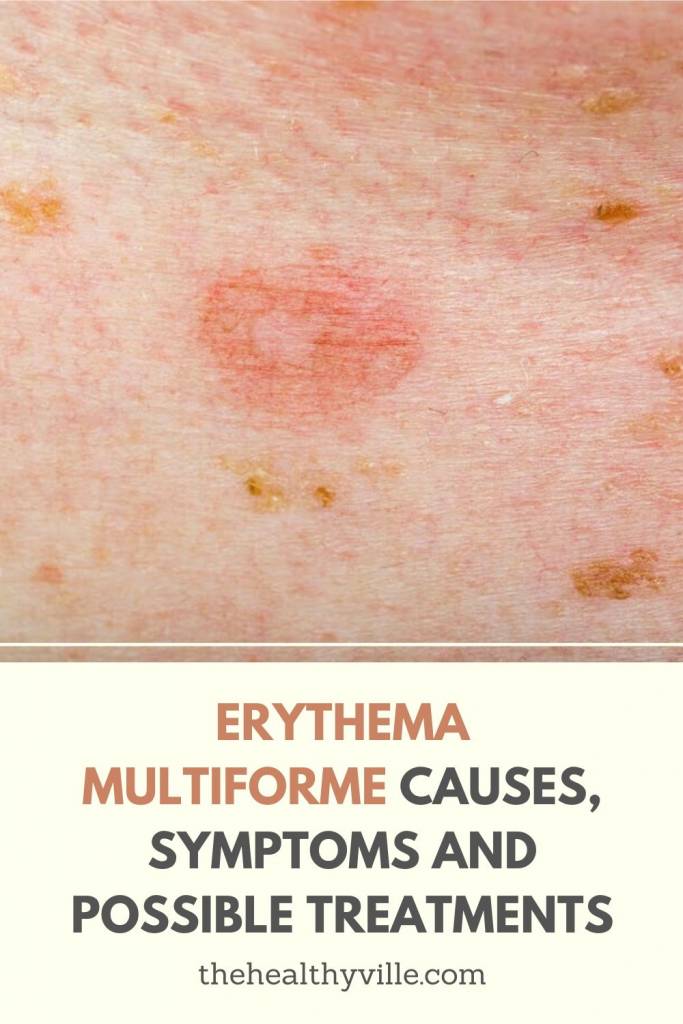 Lipid Structure, Function and Types – Learn More About It!

Procedure for Abortion – What Does It Consist Of?