The fallopian tube blockage that goes by the name of hydrosalpinx is a disease that affects female fertility. Know more about it on time!

Hydrosalpinx is a pathology that is usually related to sexually transmitted diseases, but they are not its only cause. We explain what you should know.

Hydrosalpinx is one of the female infertility most common causes. It is a disease that affects the fallopian tubes, which are two organs of the genital tract of women. The term comes from hydro (which means ‘water’) and salpinx (which means ‘Fallopian tube’).

It consists of a blockage to one or both of the tubes. The problem is that this blockage prevents the eggs from descending into the uterus. That is why fertilization becomes very complicated and, in some cases, impossible.

Many women with hydrosalpinx are unaware of it until they try to get pregnant. However, symptoms may appear to help identify the problem. Therefore, in this article we explain everything you need to know.

What is fallopian tube blockage?

Before starting to explain what hydrosalpinx consists of, it is important to know what the fallopian tubes are. As an article explains, they are tubular structures that connect the ovaries with the uterus.

The ovaries produce the ovules, which are the female gamete necessary for reproduction. The eggs need to go all the way through the fallopian tubes in order to get to the uterus. Almost at the end of this journey fertilization by a sperm happens. They are then implanted in the uterine wall.

What happens in the hydrosalpinx is that there’s a fallopian tube blockage. The reason is that there is an accumulation of fluid in them, causing them to dilate and the ovum cannot descend.

The hydrosalpinx, as indicated in Assisted Reproduction, is usually divided into two main types. The first is the one-sided. It refers to when there’s blockage to only one of the two tubes. In this case, the other ovary can produce eggs that reach the uterus.

Therefore, although it is more complicated than in a healthy woman, fertilization could occur. On the other hand, we find the bilateral hydrosalpinx. In this case there’s blockage to both fallopian tubes. The probability that the woman will get pregnant by natural methods is almost nil.

What causes this pathology?

Most cases are the result of a chronic infection of the fallopian tubes. In turn, infections are usually due to sexually transmitted diseases. Many are asymptomatic. That is why they become chronic and end up causing damage.

The two germs most associated with the appearance of hydrosalpinx are chlamydia and gonorrhea. However, it is important to note that, in addition to infections, there are other factors that can trigger this disease.

Tubal obstruction may be related to previously performed surgical procedures. Similarly, having a history of an ectopic pregnancy or suffering from endometriosis are risk factors. Hydrosalpinx could even be the result of using an IUD (intrauterine device).

Most women with hydrosalpinx have no symptoms. They usually realize when a fertility study is carried out because they cannot get pregnant.

However, there is a low percentage of women who do experience recurrent abdominal pain. There may also be a fever and general malaise. Although less common, vaginal discharge can have an unpleasant odor.

How to diagnose it?

As we just noted, most cases of hydrosalpinx are discovered during a fertility study. In order to diagnose it, the use of certain complementary tests is essential.

One of the most basic is transvaginal ultrasound. It is a relatively simple, inexpensive and innocuous test. It allows to observe the presence of fluid inside one or both fallopian tubes.

However, ultrasound is sometimes not sufficient to observe the hydrosalpinx or cannot determine its severity. Therefore, the recommendation is to get another examination, such as hysterosalpingography. It is a radiological test in which doctors inject a contrast liquid into the uterus.

With it you can see if the tubes are permeable or not. If there’s blockage, the contrast liquid is trapped. In this way, a characteristic image is obtained in which the injection does not exceed the level of the obstruction.

Finally, in some cases it may be necessary to perform a laparoscopy. It is a more aggressive surgical technique that carries risks. It consists of making a small incision in the woman’s abdomen. Doctors insert a tube with a camera at its end through this incision. So you can see the inside of the fallopian tubes.

The hydrosalpinx treatment will depend on its severity. Especially because, in many cases, it reduces the success rate of assisted reproductive techniques, such as in vitro fertilization.

This is because the accumulated fluid can contain substances that are toxic to the implanted embryo. For this reason, in some women it is necessary to resort to surgery. Especially if the hydrosalpinx is greater than 3 centimeters or there have already been unsuccessful attempts at assisted reproduction.

The surgery consists of removing the affected tube. Doctors do a laparoscopic performance, salpingectomy. The problem is that when the tube is completely removed, the ovary may be disturbed. Specifically, the flow of blood that reaches this organ.

Sclerotherapy is a technique that conserves the fallopian tubes. It consists of injecting a liquid that irritates the inside of them. In this way, an inflammatory process occurs that causes them to swell and expel the fluid by compression.

This prevents passage through the fallopian tubes, making them no longer essential and offering a higher chance of pregnancy than any other available treatment. According to a study published in Obstetrics & Gynaecology, this technique could have similar results to surgery.

The treatment of choice for women with hydrosalpinx who wish to become pregnant is in vitro fertilization. It is an assisted reproductive technique. It consists of aspirating the eggs directly from the woman’s ovaries.

These eggs, in a laboratory, achieve fertilization with the man’s sperm. Once several embryos generate, doctors place them in the uterus. The problem is that, as we have just mentioned, hydrosalpinx itself often influences the success of this technique.

Hydrosalpinx is a disease that consists of the accumulation of fluid in the fallopian tubes. This prevents the eggs from descending into the uterus and impedes fertilization. In addition, the liquid may contain toxic substances that influence the development of the embryo.

In most cases it goes unnoticed. Until the woman fails in her attempts to become pregnant, she may not know that she has the pathology.

That is why it is essential to be especially careful with sexually transmitted diseases. They are the main cause of this tubal problem.

Don’t forget to SHARE the fallopian tube blockage symptoms, causes and treatment with your friends and family on your social networks! 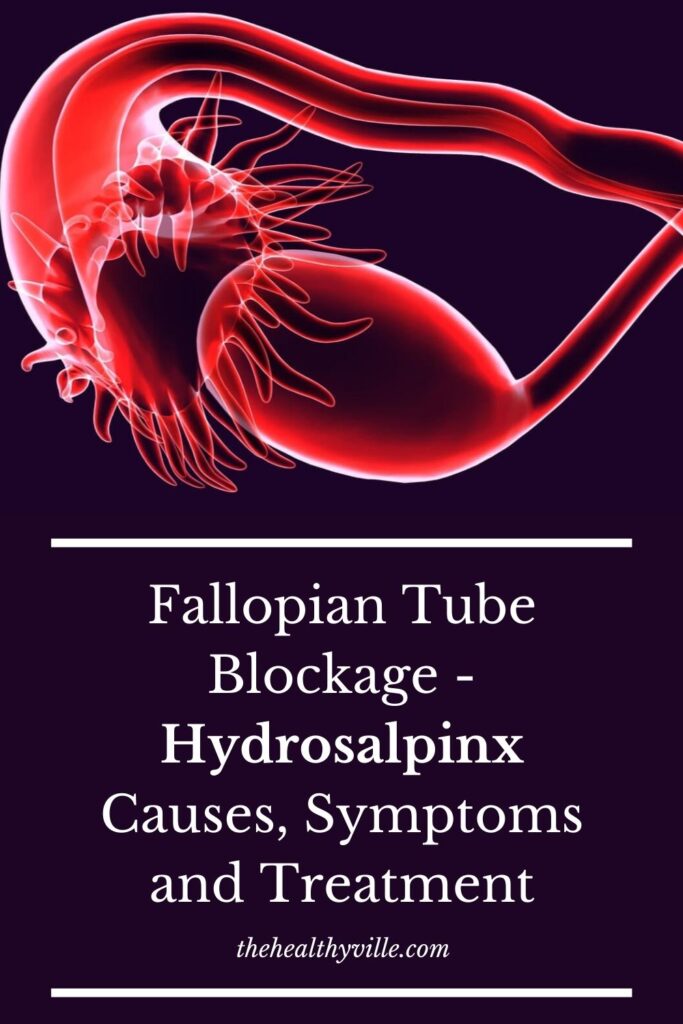