Home Health How Much Radiation Does the Sun Emit and What Are Its Effects...

How much radiation does the sun emit? What are the effects of the solar radiation on your health? How much does it affect the skin?

The effects of solar radiation on health range from minor skin lesions to contributing to the development of cancer or causing disorders in the immune system. The most appropriate is to take precautionary measures that we discuss here.

The sun, the closest star to Earth, has been the subject of poetry, dreams and also studies. Its light allows the day to exist and we warm up, stimulating the development of life. However, not everything is good news regarding this star, since the effects of solar radiation on health are not always positive.

The energy emitted by the sun is distributed in the form of radiation, but not all that it produces reaches the Earth, since a good part of it is absorbed by the atmosphere. However, the one that reaches the surface is the cause of various conditions that range from heat stroke to skin cancer.

How much radiation does the sun emit?

The radiation produced by the sun is of various types. However, there are two that are the most incidents. First there is infrared radiation, which is of low energy intensity and low penetration power through the skin.

Therefore, this type is not usually responsible for skin problems. What’s more, it produces the sensation of heat and stimulates blood circulation, as well as favors thermoregulation and causes sweating.

On the other hand, there is ultraviolet (UV) radiation, which reaches Earth less, but with a great capacity to penetrate the inner layers of the skin. Depending on the type of UV radiation in question, it may just produce a more or less intense tan, or cause injury.

The sun and its effects human health

Although exposure to the sun favors processes such as the synthesis of vitamin D, in excess it can negatively affect human health. The World Health Organization (WHO) has warned about the adverse effects of solar radiation.

The WHO has indicated that some of the negative effects are as follows:

Premature and accelerated aging: solar rays can favor the formation of free radicals and cause irreversible damage to molecules and cellular structures in the body.

Other potential damages of solar radiation have to do with the ineffectiveness of the immune system:

Increased cytokine formation: Cytokines stimulate or decrease the response of the immune system. These are mediators that reduce or multiply the defense effect, according to the needs of the environment and infections by external agents.

Modifications in lymphocyte recirculation: changes in this process can also affect the immune response, since they change the pathways and distribution routes of these white blood cells in the tissues.

T lymphocyte activation: These defense cells protect the body from infection and help fight cancer. If they are activated in the wrong way, they cause off-site responses that could lead to pathologies.

One of the most considerable health effects of solar radiation is skin cancer. The different cutaneous oncological pathologies have been increasing in the last 50 years. This seems to be related to the holes in the ozone layer, which has the function of filtering the solar rays.

Photoaging (premature aging of the skin) is another of the damages that the sun, taken in excess, can cause on the dermis. This effect of solar radiation on health is manifested through cutaneous elastosis. It happens in the areas that have been most exposed to the sun (face, neck, cleavage), in addition to thickening, dryness and deep wrinkles.

A photoaged skin will show spots and hyperpigmented areas, since it has suffered an alteration of the melanocytes. It will also have very large pores and the appearance of being thick and rough skin. This is due to a phenomenon known as hyperkeratinization.

Prevention of the effects of solar radiation

Not all people are at the same risk from the sun. Depending on the type of skin, the predisposition to suffer damage will be greater or less. That is why it is important to keep in mind the phototype of each person. White skin, for example, is more sensitive to radiation than dark skin.

How can the health effects of radiation be prevented? In principle, it must be taken into account that the damages are cumulative. This means that we have a solar capital from birth and this should not be surpassed throughout life. If exposed, appropriate protection products must be applied for each skin type.

Read more: Learn How To Protect Your Skin From The Sun Naturally With This Homemade Sunscreen!

Children under the age of three should not be out in the sun for long periods. The recommended time slot must be taken into account, as well as the geographical location and the time of year. Solar rays reach Earth with different intensity, depending on the altitude and the season.

Don’t forget to SHARE how much radiation does the sun emit with your friends and family on your social networks! 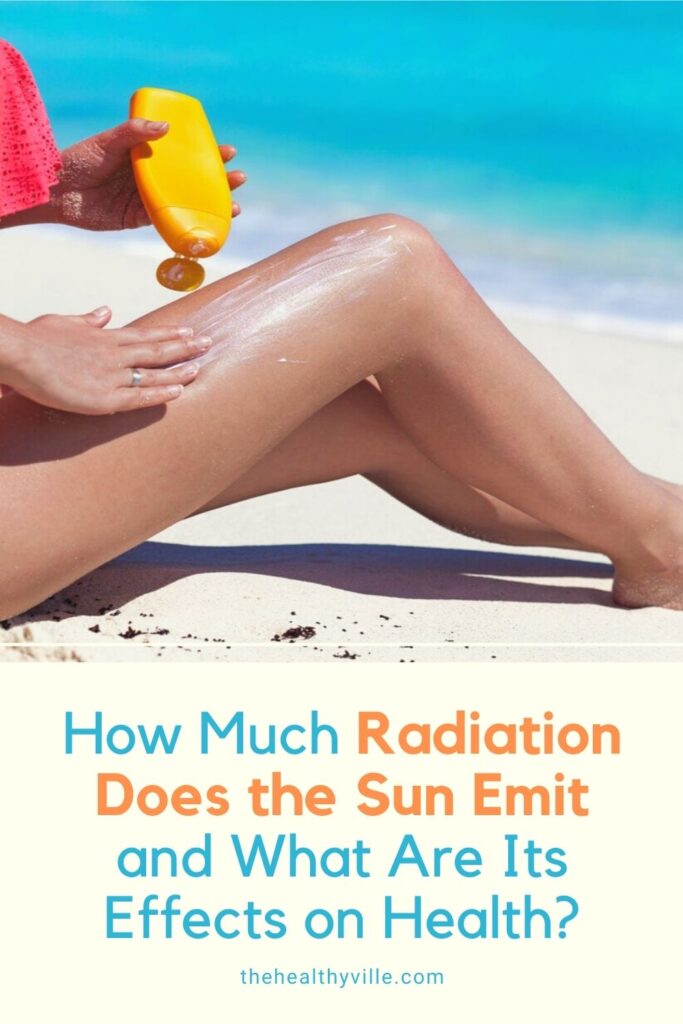