Home Health Is It Bad to Eat Raw Meat? Is Omophagy a Smart Decision...

Is it bad to eat raw meat? If you practice omophagy, you should know that you must pay special attention to food hygiene and the ingredients that you include in the dish.

Omophagy or omophagia is a practice that consists of consuming raw meat. However, this could be dangerous to health. For this reason, in this article we will analyze the consequences and the safety of starting a habit like this.

This dietary behavior is put into practice in Italian and Japanese gastronomy. Little by little it is spreading to other countries and cultures. Perhaps the most representative dish of this trend is carpaccio. This is nothing more than raw meat cut very thin and seasoned. However, today there are already many establishments that offer meat tartare among their options.

Is it bad to eat raw meat?

Consuming raw meat is not without risks. Meat is a very nutritious food, with a high protein and micronutrient content. However, it can contain bacteria and toxins.

Most of the microorganisms that appear in meat products are sensitive to high temperatures. Cooking extinguishes them from the food. According to research in the International Journal of Food Microbiology, cooking is an effective method of inactivating bacteria and spores.

For this reason, subjecting a food to high temperatures is usually enough to eliminate the microbiological risk. However, if we choose to consume the raw product, we are assuming the probability of becoming contaminated if the handling or conservation is not carried out correctly.

The importance of acids

If you are going to practice omophagia, it is crucial to add certain acids to the meat. You need to do that in order to inactivate the bacteria that can live on the outside. In this way, culinary preparations that contain raw meat among their ingredients usually include lemon juice, to subject the food to a kind of cooking.

Another option is to treat meat with nitrites to avoid microbiological risk, as stated in a study published in Bioresource Technology. However, this practice may not be beneficial to health, since the intake of dietary nitrites seems to be associated with an increased incidence of certain diseases, such as diabetes and Alzheimer’s.

The most common dishes

When it comes to consuming raw meat, there are a number of preparations that are quite common. In western culture, carpaccio stands out above all, this being a typical preparation of Italian lands. This dish is characterized by presenting thin slices of raw beef garnished with olive oil, lemon and Parmesan cheese.

In parallel, it is increasingly common to find other types of preparations such as tartar or fillet of tartar. Both are based on a very fine mincing of the meat for later mixing with lemon, egg yolk and various spices that provide flavors.

Usually, the raw meat people consume comes from veal, although pork is also frequent. However, chicken or other poultry meat is rarely without a previous cooking, since its microbiological risk is higher.

Reduce risks if you practice omophagia

If you like to eat raw meat, there are a number of hygienic practices that you should not skip. Otherwise, your chances of getting food poisoning will increase. This can be cause intestinal problems or more serious complications.

To minimize the risks, it is important to know where the meat comes from, as well as whether it has undergone any prior freezing process. You should not use the same utensil should to handle different foods and you should ensure the freshness of the product.

On the other hand, it is always necessary to carry out a pseudocooking, mixing the raw meat with some type of acid that makes it possible to inactivate the bacteria or spores that may be present. An example would be lemon juice, although vinegar would also work. Let it marinate for a few minutes before consuming it to make sure the acid does its job.

Do not forget to use top quality products and avoid practicing omophagy with poultry, since it is more likely that it suffers some type of contamination with Salmonella.

Omophagia: a tasty and dangerous practice

No one can doubt that raw meat dishes are highly popular today. However, its consumption involves risks, as we have told you. For this reason, you have to increase hygiene measures if you are going to consume a preparation that contains an ingredient of this type.

Remember that when eating a food that is susceptible to bacteria on its surface, it is best to subject it to a previous cooking process. That does not mean, however, that you can ever indulge yourself and resort to any of these delicacies.

Don’t forget to SHARE is it bad to eat raw meat with your friends and family on your social networks! 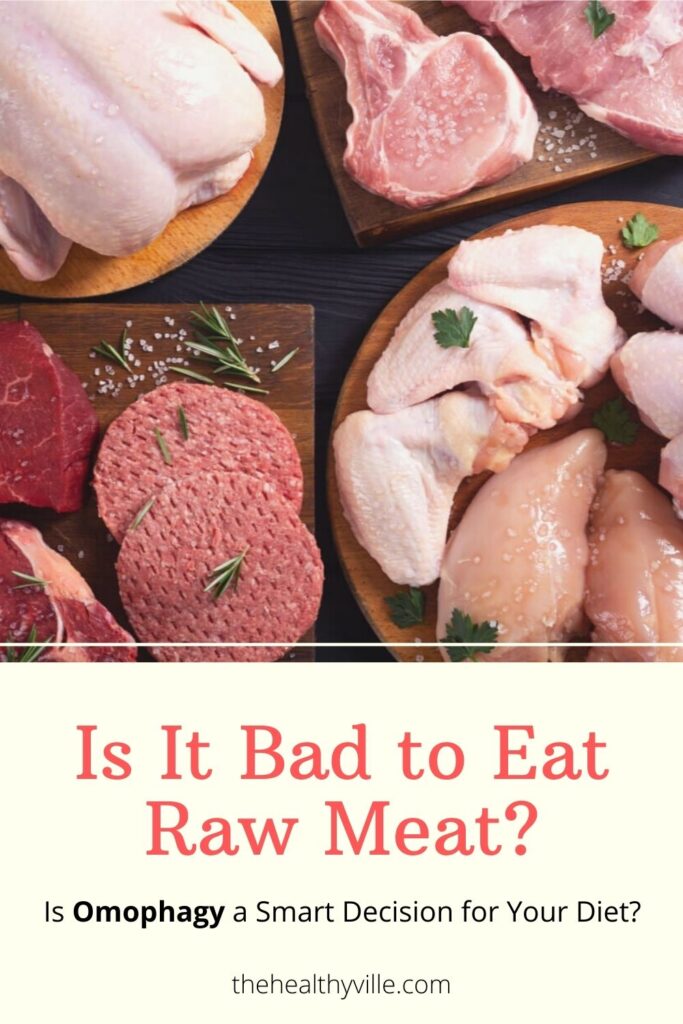