Home Health Is Pancreatitis Curable and What Are the First Symptoms

Is pancreatitis curable? What are its symptoms? What can you do about it? Find out all the information you need on time!

Pancreatitis can be due to a multitude of factors that, in general, lead to the destruction of pancreatic cells, which causes inflammation of the organ.

Pancreatitis refers to an inflammation of the pancreas, an organ involved in the digestion of fats. It is a disease that can be chronic or circumstantial. Next, in this article we will analyze this disease in more detail.

What is the pancreas?

The pancreas is a yellow, spongy-looking abdominal organ located to the left of the liver. Functionally, it is divided into exocrine pancreas and endocrine pancreas.

Exocrine cells secrete digestive enzymes that pass into the small intestine and participate in the digestion of food.

Endocrine cells produce and secrete hormones into the bloodstream, such as insulin, glucagon and other hormones. If the endocrine pancreas does not work properly, certain diseases such as diabetes can arise.

So what is it and is pancreatitis curable? Learn all about this disease.

What is acute pancreatitis? And the chronic?

Acute pancreatitis is an inflammation of the pancreas that occurs abruptly, encompassed within the exocrine pancreas. It happens as a result of a blockage in the secretion of digestive enzymes that are retained and accumulate. Finally, all these substances end up destroying the pancreatic cells themselves.

On the other hand, chronic pancreatitis is a progressive inflammation of the pancreas. Thus, pancreatic damage destroys the cells, causing a syndrome of maldigestion and an increase in blood sugar.

Although they originate in the gallbladder, they can travel to block the pancreatic duct, preventing enzymatic secretion. Gallstones are the most common cause of acute pancreatitis.

Excessive alcohol consumption. It is a usual responsible in acute cases, and up to 70% of chronic cases.

Yatrogenic: Generally due to an endoscopic retrograde cholangiopancreatography. This is an imaging test to study the bile and pancreatic ducts.

Although it rarely happens, it may be due to infections, trauma, metabolic disorders or some drugs.

In addition, there are up to 10% of cases in which the cause (idiopathic) is not identified.

On the other hand, in cases of chronic pancreatitis, the most frequent causes are:

Cystic fibrosis, which is the most common cause of chronic pancreatitis in children.

As a consequence of the secretion blockage, cymogens (inactive enzyme precursors) cannot be released. In fact, they pass into the lysosomes, the cell compartments where cell digestion occurs.

Subsequently, inside the lysosomes the activation of these by hydrolases occurs. First, the trypsinogen in trypsin is produced. In turn, trypsin gives rise to a cascade of precursor activation.

Already active enzymes are still unable to release, so they end up causing self-digestion of the cells themselves. Then inflammation and necrosis of the pancreas occurs, also affecting the surrounding fat.

When the cells are destroyed, the enzymes pass into the bloodstream, increasing their normal concentration, which is why they can be determined in an analytical.The greatest risk is that a systemic inflammatory response syndrome occurs, affecting other organs.

On the other hand, in chronic pancreatitis, the symptoms are much less noticeable:

Analytics. An increase in pancreatic amylase and lipase enzymes in blood can be determined by an analytical.

Physical exploration. Thanks to an examination, abdominal stiffness and abolition of intestinal noises can be detected.

Imaging tests Through a CT scan the degree of pancreatic necrosis can be checked, as well as other pathologies ruled out. The duct and the existence of possible stones can also be studied by ultrasound.

However, the tests are not as revealing for chronic pancreatitis. In most cases, no enzymatic alteration is detected in the analytical, so the diagnosis must be based mainly on imaging tests.

Although we have seen that abdominal pain is a key symptom of pancreatitis, other common causes of this sign should be ruled out.

Acute cholecystitis. It involves inflammation of the bile ducts. The pain is preferably located in the right abdomen, and increases after meals, especially if they are copious.

Mesenteric ischemia It involves the interruption of blood flow in the intestinal arteries. It is a very painful and very serious condition.

Myocardial infarction. The infarction of the diaphragmatic face of the heart can occur with abdominal symptoms, such as pain and vomiting.

Intestinal obstruction. Except in severe cases, it does not present with marked symptoms.

Now we need an answer to the question: is pancreatitis curable? It will depend on the severity of pancreatitis. Conventional treatments are:

Support treatment. During the first 48 hours, you should get intense hydration and oxygen. In addition, they will recommend an absolute diet, that is, suspension of intake during the first two days and analgesia with meperidine. In mild cases, these measures should be sufficient.

Antibiotics, specifically imipenem, in cases of infection of the necrotic areas of the pancreas.

Nasoyejunal Probe At least for the first 2 or 3 days. As soon as the patient tolerates and has no pain, an oral diet is one of the best recommendations.

It is necessary to treat the specific causes of pancreatitis. Thus, in cases where it is due to an excess of triglycerides, a lipid-lowering treatment should be established.

If there is an obstruction, an endoscopic retrograde cholangiopancreatography should be performed to clear the pathways. Finally, surgery is indicated in case of:

Don’t forget to SHARE is pancreatitis curable with your friends and family on your social networks! 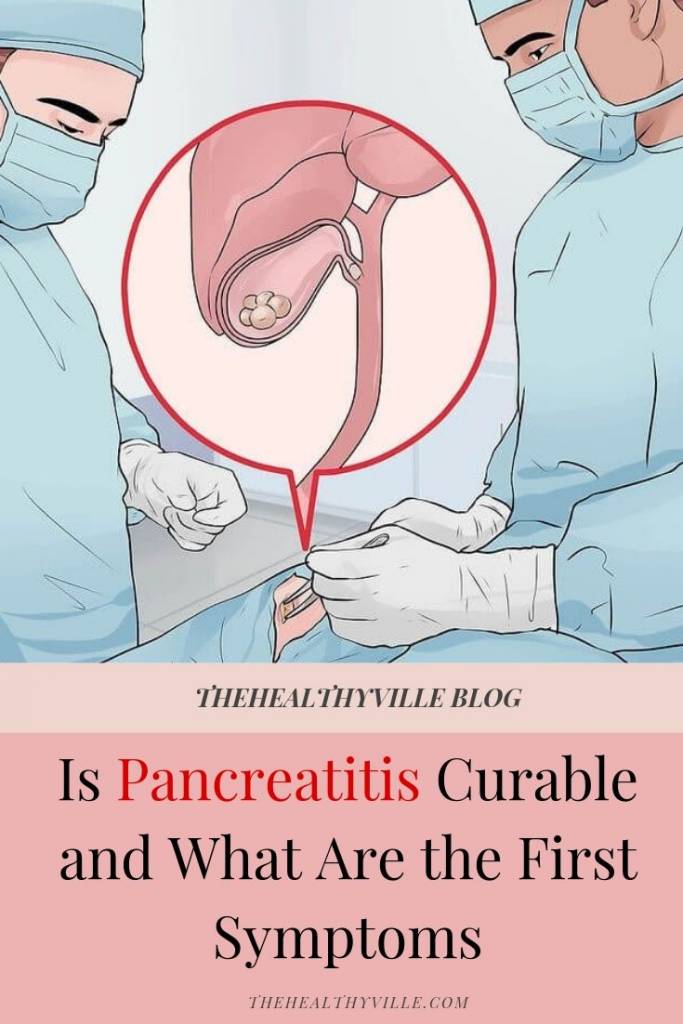