Home Health Lung Transplantation: Everything You Need to Know

Lung transplantation is a procedure that has evolved over time and is increasingly offering more promising figures. Find out more about it!

A person undergoing this type of surgery will need continuous emotional support and a lot of discipline to change their lifestyle.

Lung transplantation is a surgical procedure in which one or both unhealthy lungs are replaced by healthy ones, provided by a deceased donor. It is a complex surgery that significantly improves the quality of life of a person.

The first successful lung transplants were performed in the 1960s by Dr. James Hardy and then by professional Denton A. Cooley in 1968. The initial patient was a two-month-old girl with congestive heart failure and recurrent pneumonia. .

This type of procedure is performed when a person has a terminal lung disease or a serious pathology that has proven resistant to conventional treatments. In any case, the lung transplant candidate must meet some requirements to be eligible.

Why do surgeons perform a lung transplantation?

Typically, doctors perform lung transplantation after trying out all available treatments have  to correct lung failure and with no results. In general, it is for people under 75 years of age who have a serious pathology in the lungs.

Some of the diseases that can lead to a transplant of this type are the following:

Candidates for lung transplantation must meet certain requirements, as we have already mentioned. Only if they conform to them are they eligible for the procedure. Among the criteria to take into account are the following:

Those who have an active infection are not eligible. Also those who have had cancer in the last two years or have a serious health problem in another organ. Likewise, those who are malnourished or who do not have a support network that guarantees adherence to post-transplant treatment.

Lung transplantation is a complex surgery and has considerable risks. The most important are rejection and infection. The first occurs when the patient’s immune system attacks the transplanted lung or lungs.

Anti-rejection medications to prevent this from happening, but they can cause side effects, such as weight gain, stomach problems, and facial hair growth. These drugs also make a person more prone to developing other diseases, such as diabetes, osteoporosis, kidney failure, and high blood pressure.

Therefore, after a transplant of this type, the patient must observe strict hygiene measures and avoid contact with crowds or sick people. Finally, another possible risk is the formation of blood clots after surgery, due to increased blood clotting.

How is it the procedure?

The process of performing a lung transplantation begins long before the surgery takes place. After a patient has been evaluated and found eligible for the procedure, the next step is to enter a waiting list until there is a donor.

While the transplant candidate awaits the donation, they must follow the medical indications regarding their lifestyle. When a lung is available for the procedure, doctors evaluate its compatibility with the patient. If it is adequate, they carry out the transplantation.

A person on the waiting list for lung transplantation should be ready to respond to the call of the doctors as soon as it occurs. It is best to have a suitcase ready with personal items and regular medications.

When the candidate arrives at the hospital, they undergo a series of tests to verify compatibility. Doctors assess the patient’s general health, too. If there are doubts about it, the procedure can be canceled. If everything is in order it will take place almost immediately.

The patient during lung transplantation surgery is under general anesthesia. If a single lung needs replacing, the intervention lasts between four and eight hours; if both lungs, it may take between six and twelve hours.

The intervened patient must stay in the hospital for a period of between 7 and 21 days. The most common is that you spend several days in the intensive care unit (ICU) after the surgery. However, each medical center has its own protocols.

The first 24 to 48 hours are crucial. During this period, doctors carry out a meticulous observation, in which they evaluate the functioning of the lungs, heart, kidneys and mental state, in particular. Likewise, to verify that there are no bleeding or hemorrhages.

The most common is that the recovery period extends for six months, in the first instance. During the first three, doctors do a close follow-up to evaluate the functioning of the lungs and prevent any complications.

In this first stage, you have to go frequently to the hospital for tests that include x-rays, biopsies, laboratory tests and electrocardiograms. The doctors monitor the reaction to medications, as well.

After this phase, the patient must make adjustments in his life, which include taking immunosuppressants and regularly attending therapies and consultations. The first year after lung transplantation is the most critical. Afterwards, all the risks begin to decrease.

The most common is that there are weekly consultations during the first three months; then quarterly consultations for a year. Then an annual visit for the next 5 to 10 years.

Don’t forget to read: What Does Coronavirus Do to the Lungs? – What We Know so Far

How long is the survival after a lung transplantation?

According to the available data, the average life span after a lung transplant is 5.8 years. This can vary, depending on the person’s previous illness. Those with cystic fibrosis survive 8 or more years after surgery.

Patients with idiopathic interstitial pneumonia survive 4.8 years on average. 32% of those who have undergone this procedure live 10 years or more. The highest risk of death occurs during the first 12 months, so that is when there’s a reinforcement of the controls.

Don’t forget to SHARE everything you know about lung transplantation with your friends and family on your social networks! 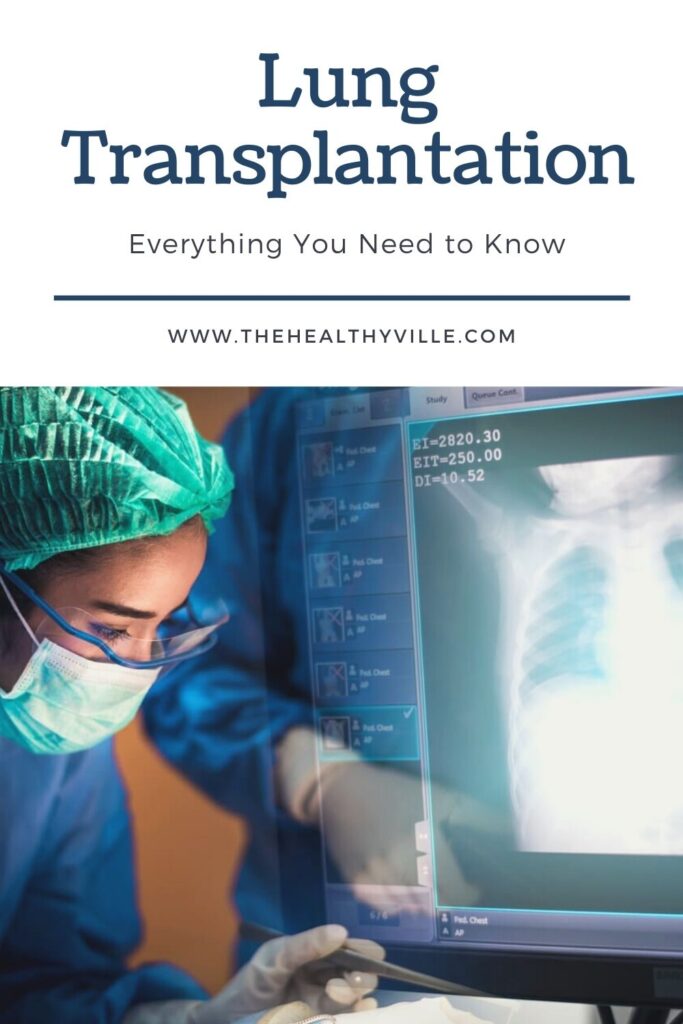