Osteosarcoma in children is pretty frequent. Knowing the symptoms, causes and treatments would save your child’s life. Learn all about it!

In recent decades there have been great advances in the treatment of osteosarcoma, improving functionality and overall survival. We explain the symptoms, how to detect it and what treatment options exist.

Osteosarcoma in children is the most common primary bone malignant neoplasm at this age. These are primary bone tumors, that is, they originate in the tissue itself. They are rare, but despite their rarity they represent a latent danger.

The peak of diagnosis is between the ages of 13 and 16, at which point the spurt of adolescence occurs. In addition, a greater presence has been observed in boys than in girls. Its characteristic is the production of immature bone by malignant cells.

Presentation of osteosarcoma in children

The most common sites for osteosarcoma in children are the long bones, especially in the distal femur (in the thigh, near the knee), the proximal tibia (in the leg, near the knee as well), and the proximal humerus. (on the arm, near the shoulder). The epidemiological distribution is as follows:

At the time of diagnosis, most patients are presumed to have metastatic disease, that is, tumors in other parts of the body, outside of the bones. These would be small, without symptoms, called micrometastases. The most common site for this complication is the lungs.

Most children with osteosarcoma have localized pain, lasting several months, that may be related to activity or movement. It often begins after an injury and can increase or decrease over time. Sometimes fractures occur as the first manifestation.

The most important finding on physical examination is a soft tissue mass that is often large and tender to palpation. It can also be hot.

The most common areas are those described above, that is, on the thigh, leg or arm. But they can also appear in other bones of the body.

Infrequently, there is fever, weight loss, and general malaise. It is important to make a timely consultation in the event of any type of pain mentioned, whether it is associated with movement or at rest, even if there was no trauma that justifies it.

Laboratory evaluation is usually normal, except for the alteration of some parameters such as alkaline phosphatase, lactate dehydrogenase (LDH) enzyme, and erythrocyte sedimentation rate. In most patients they are within normal ranges.

In children, most osteosarcomas are sporadic. In other words, hereditary predisposition represents a minority of patients. From what is known so far, these types of tumors occur at a time when the long bones are in a stage of accelerated growth, but the underlying cause is still unknown.

Imaging studies will be performed on a suspected patient with osteosarcoma. These include a plain X-ray of the affected area and an MRI. In addition, a biopsy of the bone lesion, a lung scan looking for metastases, and other images of all the bones will be performed.

With all this information, the so-called tumor stratification will be made, which will allow planning the best treatment to be performed on the patient. Generally speaking, surgery and systemic chemotherapy are the mainstays of approach for children with non-metastatic osteosarcoma.

Surgical treatment has evolved in recent decades. Its main objective remains to achieve complete removal of the tumor, but with an emphasis on a more conservative surgery to maintain the function of the affected limb.

Chemotherapy is a standard component of osteosarcoma treatment in both children and adults. It improves the survival of patients, which would be in relation to the micrometastases.

The patient needs chemo before and after surgery. Sometimes it can have unwanted effects on different organs, such as the bladder, liver, and ears. Therefore, periodic monitoring is carried out.

In very specific cases, radiotherapy associated with treatment is also used, since the tumor’s response to it is not optimal.

Read more: Chemo and Radiation Consequences – What To Do After?

Treatment for side effects

The specific surgical procedure in each patient depends on the location of the osteosarcoma and the extent of the tumor. For this reason, not all patients will be candidates for a more conservative surgery that allows maintaining the functionality of the affected limb.

Most children with osteosarcoma will require reconstructive surgical procedures to restore structural integrity at the site where the doctor removes the tumor. This is in order to preserve functionality. Sometimes doctors use joint prostheses or grafts.

By way of conclusion, we can say that the prognosis of children diagnosed with osteosarcoma has improved substantially and their chances of leading a normal life after the treatment has also been carried out.

There’s an improvement in patient survival rates over the past 30 years, largely due to chemotherapeutic advances, since many patients have microscopic metastases at diagnosis. Chemotherapy eradicates them.

Also, the surgeries doctors perform today tend to be more conservative. But of course, we must clarify that the choice of treatment is quite complex and is based on the stratification that is carried out.

Don’t forget to SHARE about osteosarcoma in children with your friends and family on your social networks! 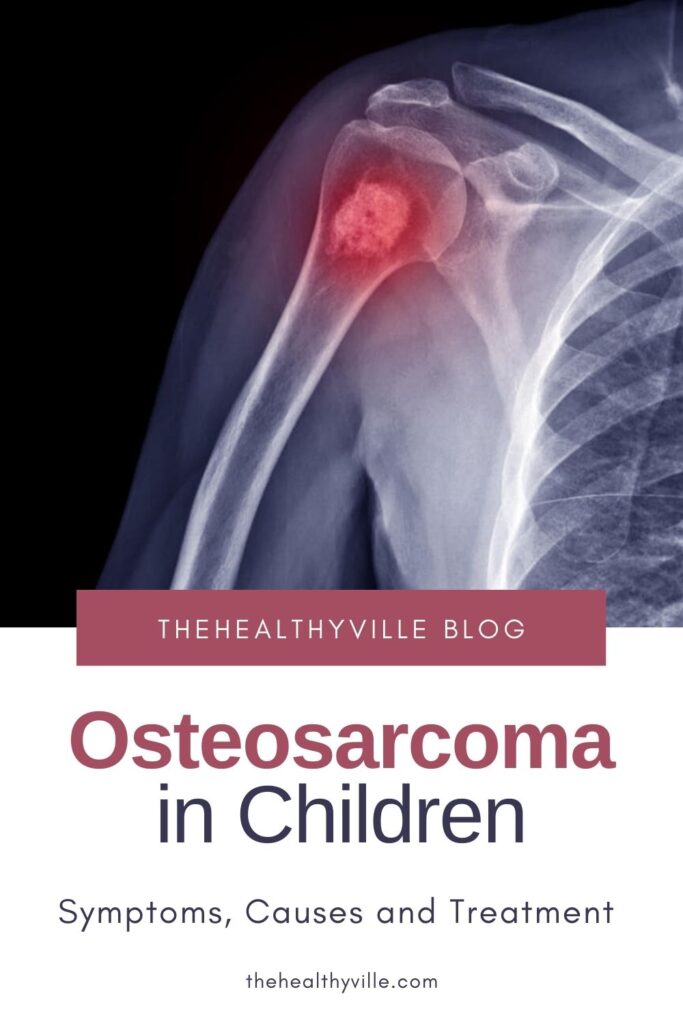