Home Health Septoplasty Surgery: Everything You Need to Know About It

Septoplasty surgery is a procedure performed to correct the position of the nasal septum. It is necessary to perform it, since this anomaly can cause different health problems.

Septoplasty is surgery to repair the passages in the nose and make breathing easier. It is an operation that doctors perform, generally, on patients with a deviated septum, recurrent rhinitis or sinus problems.

Septoplasty is also popular as septal reconstruction. It must be clarified that it is not an aesthetic procedure, because although it generates a change in the shape of the nose, the objective of the intervention is not to improve appearance, but to avoid health difficulties.

What is septoplasty surgery?

Septoplasty is a corrective surgical procedure to straighten deviated septa. The septum should be in the center of the nose; If it is not aligned correctly, one of the nostrils runs the risk of narrowing, impeding the normal flow of air and causing difficulties in breathing.

The presence of an unaligned nasal septum is known as septal dysmorphia. It is an alteration whose origin can be congenital or acquired. In the first case, it is the result of intrauterine compressions, birth trauma or alterations in craniofacial development. In the second, it is due to trauma or altered harmonic growth.

Nasal deviation can cause obstruction, predominantly oral breathing, predisposition to sleep apnea, and a dry mouth sensation. It is a problem that is usually due to allergies or narrow nasal passages.

How do doctors carry out the septoplasty surgery?

You’re under general anesthesia in most cases during the septoplasty surgery. It is an outpatient operation, that is, it does not require prolonged hospitalization.

The patient who is going to undergo this intervention is face up, on the stretcher. Your head should be elevated above your torso, about 30 degrees.

The procedure begins with vasoconstrictor and anesthetic infiltrations in the septal mucosa to allow a correct dissection between the cartilage and the bone. Then the doctor lifts the mucosa, which is the inner lining of the nose. In this way, they can see the tissues that need remodeling.

Sometimes it is necessary to remove small pieces of bone and cartilage. What follows is to put the mucosa back in place and close with suture. Sometimes doctors leave the nasal plug in for 48 hours so that bruising or bleeding does not occur.

Differences between septoplasty and rhinoplasty

Generally speaking, any nose job is called a rhinoplasty. However, septoplasty and rhinoplasty are not the same, while the former aims to correct a dysmorphic septum and nasal wall; the second seeks to modify the shape of the nose.

Before and after surgery: what to consider?

To have a septoplasty you should talk with your doctor about how to prepare and what risks it may involve. You should have your medical history on hand to answer the professional’s questions about the conditions you have had.

Your doctor will perform a physical examination in which you will examine the inner and outer skin of your nose. To serve as a reference, you may even get photographs during the procedure that you need to practice.

Before this surgery, you should not consume medications such as ibuprofen or aspirin, as they could increase bleeding. If you are a smoker, they will ask you to stop smoking days before the operation. The previous day you should not eat abundantly or drink alcoholic beverages.

After the operation you should consider the following:

It is normal to feel mild swelling in the face, headache and nasal obstruction during the first day after septoplasty. The discomfort is usually mild during recovery and is easy to control with oral pain relievers. Congestion tends to go away within a week.

Generally, they will tell you to rest all day after surgery. To help relieve swelling, cold compresses can be used on the face, without wetting the nose. During the first 24 hours you should not take baths or showers. To clean the area you must follow the instructions that you will get before registering.

If you have trouble breathing, severe nosebleeds that won’t stop, pain that won’t go away with painkillers, high fever and chills, disorientation, or stiff neck, you should call your doctor or go to the hospital.

Don’t forget to SHARE everything you now know about septoplasty surgery with your friends and family on your social networks! 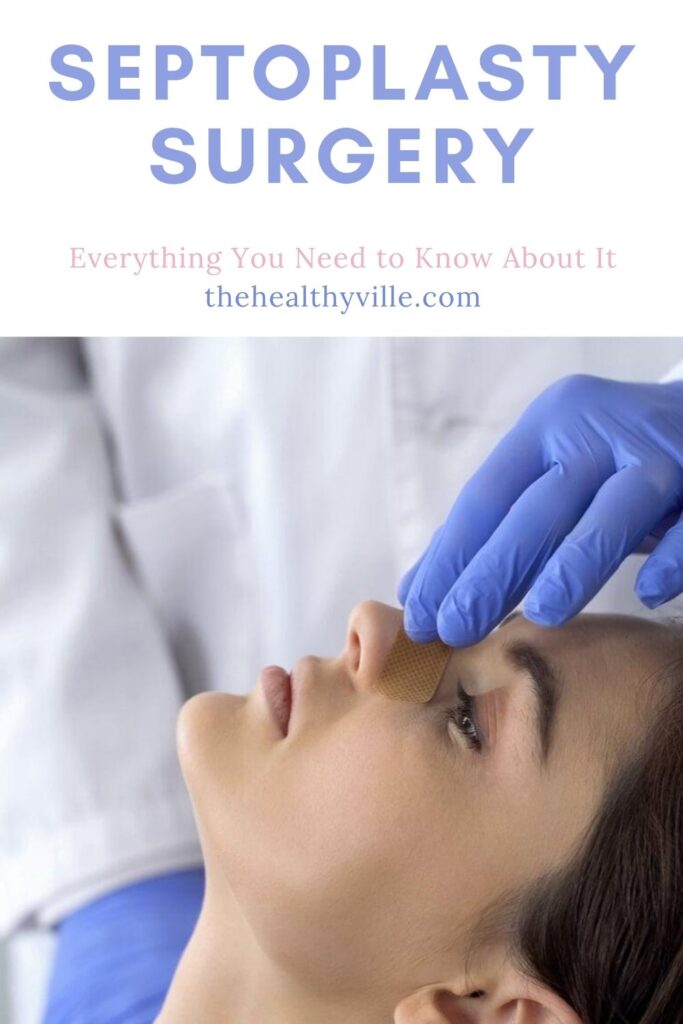