Home Health Subconjuctival Hemorrhage or Red Spots on the Eyes: Why Do They Occur?

Subconjuctival hemorrhage is the appearance of red dots on the eyes. Learn why do they occur and how to stop them from appearing.

Although red spots on the eyes cause concern and fear in those who suffer from them, in most cases they have to do with benign processes that do not put health at risk. They almost always disappear by themselves, after the passing of days.

Red spots on the eyes are also known as ocular effusion, subconjunctival hemorrhage or hyposphagma. They occur when some capillaries or blood vessels are broken in an area of ​​the eye called the conjunctiva.

The red spots in the eyes have that aspect because the blood is lodged between two zones of the conjunctiva: the sclera and the bulbar. Although their appearance can certainly make an impression, the most common is that they do not represent a serious health problem.

Usually, red spots on the eyes appear without any bumps or injuries. In almost all cases, people realize they have them when they look in the mirror, since they rarely cause pain or cause blurred vision.

Red spots on the eyes

Red spots on the eyes are bleeding that appear on the white part of the eye. They have a bright color and are visible to the naked eye. As already noted, they correspond to the rupture of vessels or capillaries. The blood does not go outside because it remains lodged between two areas of the conjunctiva.

Although this symptom causes alarm because of its appearance, in principle, it is not a sign of something serious. It is almost always temporary injuries, which in most cases do not take more than a week to disappear. They should not be a reason for consulting the specialist, unless they occur very frequently.

The most common is that the red spots on the eyes are not accompanied by any other symptoms. They only merit a consultation with the ophthalmologist if there are signs of external bleeding, traces of blood in the iris, constant pain, blurred vision, sensitivity to light or the appearance of a bump in the eye. In those cases, it may be a corneal effusion and requires immediate attention.

To better understand this symptom, we need to know some details about the conjunctiva. This is a very thin, elastic and transparent membrane that covers the white part of the eye, called the sclera or sclera. It also covers the inner face of the eyelids.

The conjunctiva plays an important role in the defense and protection of the eyes. In general terms, it constitutes a barrier of protection against possible infections. Likewise, the conjunctiva is essential to provide the lubrication that the cornea requires.

In the conjunctiva there is a large number of blood vessels. These may eventually rupture and cause a small hemorrhage that seeps into the white part of the eye or sclera. When the amount of blood reaches a certain volume, red spots appear in the eyes.

Why does subconjuctival hemorrhage appear?

The subconjuctival hemorrhage may appear for many different reasons. In most cases, they are due to one or more of the following causes:

It is highly unlikely that a subconjunctival hemorrhage could compromise visual health or be a symptom of a serious illness. Almost always, the sclera itself reabsorbs the blood in a period that does not exceed 10 days. Therefore, there are no standardized treatments to address this condition.

Other info to consider

Usually, the red spots on the eyes have a very red and bright color at the beginning. As the days go by, the tone darkens and intensifies. Then, little by little, they begin to fade, until they disappear completely.

It is normal for the eye to have a yellowish color at the end of that process. The most advisable thing during that period of time is not to sleep on the left side of the body and avoid the consumption of tobacco and alcohol. In no case should the person self-medicate.

It is also not advisable to rub your eyes during this process, as this could increase bleeding. If what caused this benign lesion was a blow, it is necessary to visit the doctor to determine its scope and its consequences.

Don’t forget to SHARE the causes of subconjuctival hemorrhage with your friends and family on your social networks! 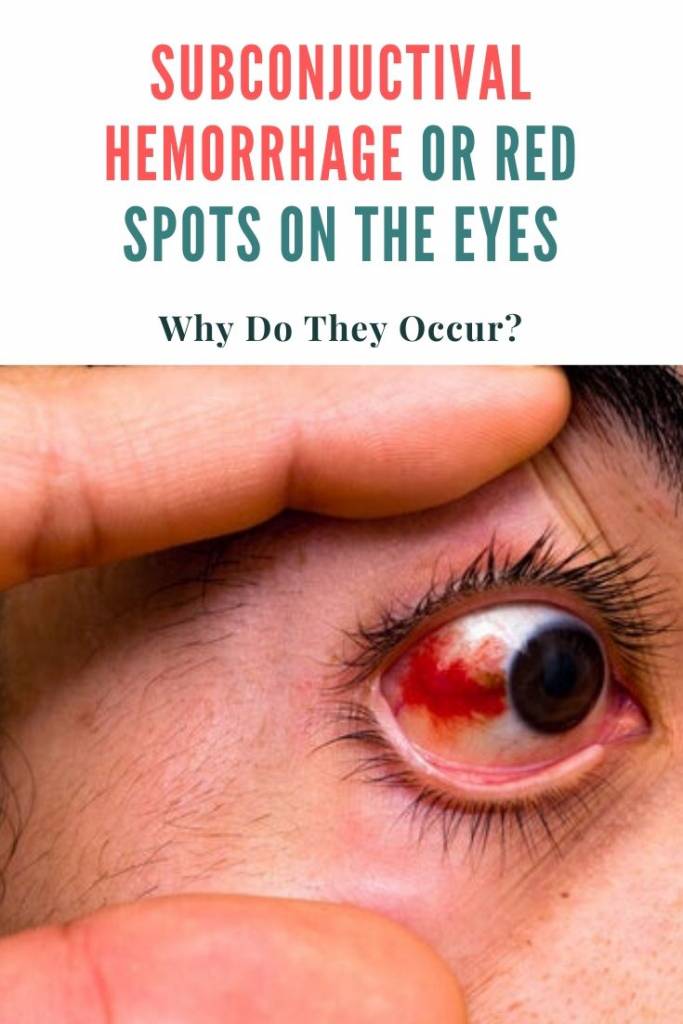