The symptoms symptoms of heart failure in women are usually more difficult to detect than in men, since they are confused with common conditions. However, it is essential to know them to learn to identify them.

Heart attack is one of the heart diseases that can affect both men and women; however, their clinical manifestations differ according to gender. How to identify the symptoms of stroke in women?

The ignorance of the disease is one of the reasons why  the number of female victims in recent years has increased. Since the warning signs are similar to those of other common conditions, women take longer to see a doctor.

Most worrisome is that the lack of timely attention can trigger fatal consequences in most cases. Therefore, it is essential to know why it develops and what initial signs help to recognize it before it is too late.

Why does a heart attack occur in women?

Myocardial infarction, also called a heart attack, occurs when blood flow to the heart is blocked. This situation is usually the result of the narrowing of the arteries, either by the accumulation of lipids such as cholesterol or by an arterial “spasm”.

The interruption of blood circulation can damage a part of the heart muscle. Although the treatments have improved significantly, it is still a leading cause of death in both men and women.

There are several factors that contribute to the accumulation of fat deposits in the arterial walls. However, many of these can be avoided by adopting healthy habits. Let’s see below the most common.

Symptoms of heart failure in women

The symptoms of heart failure in women are not precise and are less evident than in men. Because of this, almost all of them take longer to go to the doctor when they notice that something is not right. However, it is important to know them, since perceiving them can help to achieve an opportune diagnosis.

Puncture pain in the chest

One of the symptoms of heart attack in more common women is a throbbing pain at the level of the thorax. It is described as a feeling of tightness in the chest that lasts a few minutes. In addition, it can occur intermittently, in different intensities.

Pain in the arm

Chest pain can radiate to one of the arms, being an obvious sign of heart attack. This symptom, which also afflicts men, often occurs on the left side.

Feeling a sudden cold sweat can be the sign of a heart failure in women. Although there are several possible triggers, interference in the flow of blood may be the cause.

There are many situations that can lead to an anxiety crisis. Despite this, it should not be overlooked, as it sometimes alerts the heart rate out of control. If that feeling of anxiety is accompanied by chest pain or vertigo, it is best to go to the doctor.

A feeling of choking or shortness of breath may appear suddenly before a heart attack in women. You can notice them during rest or when performing minimal physical activities. It may be necessary to take deep breaths to breathe.

The chronic fatigue that interrupts the day is one of the symptoms of heart attack in women most ignored. Since there are many possible causes, almost nobody pays enough attention. However, in this case it could derive from poor circulation and cardiac over-exertion.

The infarction does not usually cause immediate fainting in women; However, when it is developing it can produce a feeling of daze and dizziness that increases with the hours. Of course, this is usually accompanied by chest pain.

Further info: How To Stop A Heart Attack In 30 Seconds? – Useful Info For Emergencies

Women are twice as likely as men to have nausea and vomiting during a myocardial infarction. Often women think these signals are digestive conditions such as indigestion.

Acid reflux is a symptom that makes you feel a strong burning sensation in the chest and upper stomach. Although few cases have to do with a heart attack, you should not rule out the possibility of heart failure, especially if you feel some other of the before mentioned symptoms.

Don’t forget to SHARE the symptoms of heart failure in women with your friends and family on your social networks! 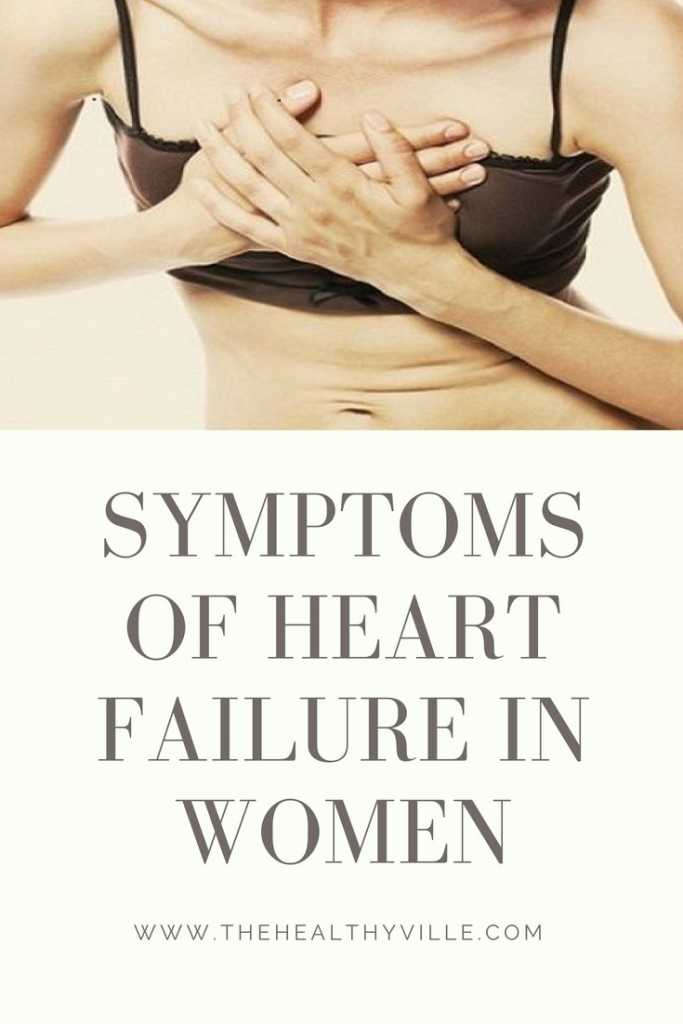