Home Health Triglyceride Levels: All You Need to Know about Them

Keeping the triglyceride levels under control is crucial to reduce the risk of chronic cardiovascular diseases. When are your levels exceeded? In this space we detail it.

When we go to the doctor for a routine check-up, he asks us for a series of laboratory parameters that are included in the usual analysis. Among them is the triglyceride level, almost always due to bad and good cholesterol.

This data is essential for cardiovascular health and to assess whether or not to adhere to a specific diet. So much so that nutritionists can manage it to assess lipid intake in the past 10 days.

By measuring the triglyceride level, what we are doing is obtaining a value of a part of the lipids that circulate in human blood. There are also fats in the tissues, but we cannot measure it with the usual blood tests.

The body uses lipids to build cell membranes and to store energy. Starting with cholesterol and triglycerides, the organism is able to feed internal metabolic processes, which it resorts to in response to the demand for kilocalories.

The storage site is the cells known as “adipocytes.” There are hay fat droplets that serve as a deposit. If we start a series of trainings, for example, or go through extremely cold situations, that reserve will be used.

There are some parameters that doctors use to know if triglycerides are in the normal values ​​within the blood. Each laboratory manages its own reagents and that modifies the normality intervals, although there are figures that are more or less the same always.

In the case of triglycerides, they are stipulated as within normality when they do not exceed 150 milligrams per deciliter of blood. If they are between 150 and 199, although they are not yet high, they trigger alerts for a possible eating disorder.

Above 200 milligrams per deciliter is abnormal and you have to act with changes in habits and medication. If they exceed 500, we are facing a particular condition – rare – of severe hypertriglyceridemia, generally associated with genetic mutations.

Why are the triglyceride levels high?

Having high triglyceride levels is concerning. Most people with this problem can manage it through diet, if they follow strict guidelines and what goes with physical exercise.

The latter appear in processed products that underwent the hydrogenation technique, such as crackers, cakes, empanada lids, and candy.

There are diseases that have an increase in these lipids as a symptom or sign. This would be a side effect within all the modifications that these pathologies imply in the body. The most notorious are the following:

Diabetes: it is a metabolic disorder that not only alters glycemia. Proteins and lipids also damage the effects of lack of insulin or of little action of it. Such is the case of triglyceride levels, which are consistently high in diabetics.

Hypothyroidism: Lack of action of thyroid hormones affects cellular metabolism. This means that lipids cannot be as they should be for human bodily functions. Then, triglycerides accumulate with increased adipose tissue.

Renal insufficiency: the kidney performs endocrine tasks, in addition to manufacturing and concentrating urine to purify the blood. In kidney failure, the organ is unable to carry out its daily tasks and to efficiently produce the substances necessary for homeostasis of the internal environment. All fats increase your blood concentration in this disorder.

Other causes of high triglycerides

Sedentary lifestyle, on the other hand, is a cardiovascular risk factor, partly due to its metabolic incidence on lipids. Those who do not exercise regularly have high levels of cholesterol and triglycerides, with less blood circulation, so the possibility of arteriosclerosis is also higher.

Finally, we have toxic habits among those associated with elevated triglycerides. Smoking and consuming alcohol in an addictive way interrupts the processes of accumulation and use of lipids. The liver, which is an organ with great influence on it, weakens with the toxicity of tobacco and alcohols.

Is it possible to have a low levels?

While high blood triglycerides are always a concern, there is the other opposite condition, with low values. To determine this diagnosis, less than 35 milligrams per deciliter of lipid must be detected.

In this case, the causes are less than in pathological elevations, but not less important. The four most frequent are the following:

Diet: A diet of saturated and trans fats will raise triglycerides, but conversely, there are also diets that lower them too much. Diet plans that do without all lipids excessively end up being counterproductive.

Malabsorption syndrome: when the intestine is not able to take all the nutrients from the food we eat, we are dealing with a malabsorption syndrome. The causes are very varied, but the end result coincides in the deficit of incorporation of necessary substances. Lipids, in particular, are excreted with the feces in this disorder.

Hyperthyroidism: A high concentration of thyroid hormones in the blood forces cellular metabolism, causing a consumption of large part of the energy reserves of lipids. Adipocytes do not conserve triglycerides and deliver them.

Malnutrition: in severe cases of malnutrition, due to lack of intake or pathologies that lead to weight loss, patients register hypoglycemia, hypoproteinemias and hypolipidemias.

It is important to have a blood test regularly. In this way, you can detect various biochemical parameters before they cause problems. With triglycerides, this lowers cardiovascular risk.

Whether there are high levels of this lipid or a pathological decrease in it, it is advisable to follow a multidisciplinary approach with medication, diet and physical exercise. A clinical doctor and a nutritionist can help regularize values.

Don’t forget to SHARE everything you learned about triglyceride levels with your friends and family on your social networks! 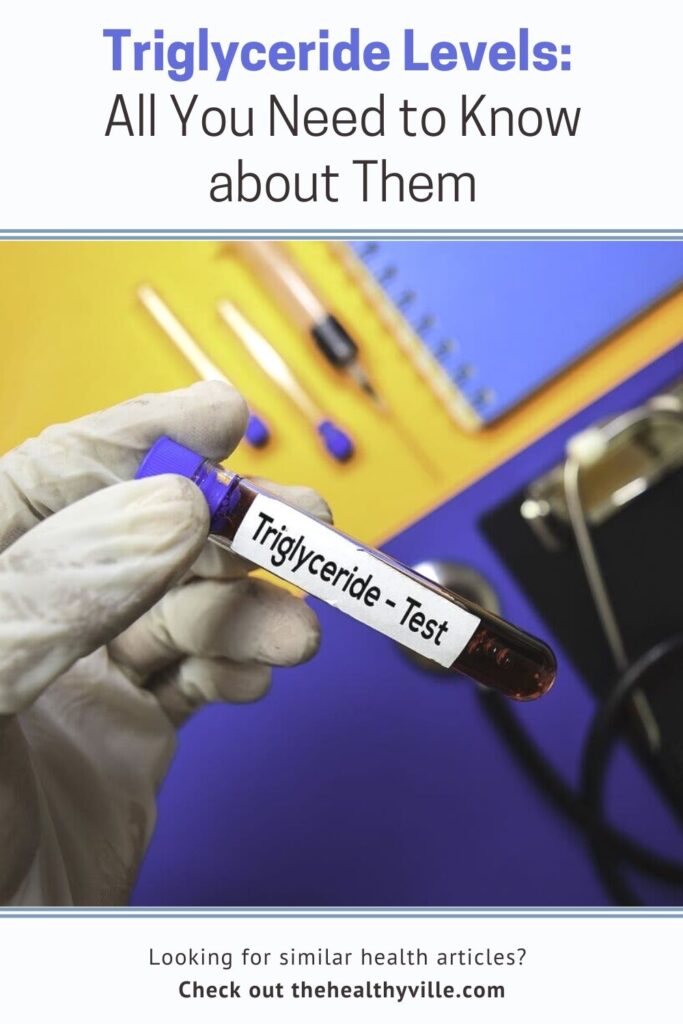