Home Health What Causes Bronchitis and Bronchiolitis and How Different Are They?

What causes bronchitis and bronchiolitis? Are they similar or different diseases? How to know you have one over the other? Learn everything!

Bronchitis and bronchiolitis are diseases that present with inflammation in the respiratory tract, but both the population groups affected and the causative agents of the disease are different in each case. Keep reading to know more.

Bronchitis and bronchiolitis are two diseases that, despite affecting the same anatomical site, have different etiology, clinical picture, and risk groups. According to the World Health Organization (WHO), respiratory tract diseases are the leading cause of death and disability worldwide.

Estimations are, for example, that more than 65 million people suffer from chronic obstructive pulmonary disease (COPD), among which three million die from this cause.

That is why knowing the characteristics and variations between the different pathologies of the respiratory tract is essential. Today we present the differences between bronchitis and bronchiolitis, two diseases that have as many similarities as they are inequalities.

What are the main differences between bronchitis and bronchiolitis?

According to the National Heart, Lung, and Blood Institute (NIH), bronchitis is defined as a condition in which the bronchial tubes become inflamed. This causes a cough, often with mucus. The development can be acute or chronic.

On the other hand, bronchiolitis is an inflammation of the small airways, that is, the bronchioles. If we understand the respiratory system as a “branched tree”, bronchitis affects the larger branches and bronchiolitis the smaller ones, where the leaves are found.

Thus, we can say that the essential difference between both pathologies is the affected place. As much as in both cases it is limited to the respiratory tract.

What are the symptoms?

Because they are two types of inflammation of the airways, it is common to think that both pathologies will manifest in a similar way. Although this is the case to a certain extent, below we explain the clinical picture of each of them.

The Spanish Society of Internal Medicine advises us that there are two types of bronchitis: acute and chronic. The main difference lies in its duration, since it is considered that the condition becomes chronic when the patient presents a constant cough in three months of the year, in at least two consecutive years.

In any case, we can summarize the symptoms of this disease in a general way. The Centers for Disease Control and Prevention (CDC) collect the following signs:

At this point, it is necessary to note that bronchiolitis is a characteristic disease in children under two years of age. For this reason, it is usually differentiable from bronchitis, as it is not common in adults.

Even so, portals such as the Mayo Clinic and pediatric journals collect the symptoms of this condition. Some common signs are as follows:

As we can see, the symptoms of bronchitis and bronchiolitis are similar. After all, we are talking about inflammatory processes in different parts of the bronchial tree.

What causes bronchitis and bronchiolitis?

It is necessary to know that both pathologies are closely related to agents of viral origin. According to pediatric sources, what causes bronchitis, in more than 90% of cases of it in infants, are viruses (adenoviruses, influenza viruses and others), while the remaining 10% correspond to bacterial infections, especially by the Streptococcus pneumoniae species.

On the other hand, bronchiolitis is due to respiratory syncytial virus (RSV) in 60-80% of cases, with other viral agents originating in the remaining 15%. Only 5% of these infections are bacterial.

Sources already cited confirm that chronic bronchitis is a pathology much more associated with the patient’s lifestyle. Factors such as smoking or inhalation of toxic products at work favor, at least to some extent, the appearance of this long-term disease.

We can encompass the risk factors for bronchitis and bronchiolitis into a series of common groups. The population groups that should be more careful are the following:

Tobacco smokers are prone to both bronchitis and bronchiolitis.

Newborn children and infants are more vulnerable to viral and bacterial infections, as their immune systems are not yet fully ready.

Bronchial infections can affect patients with HIV or other pathologies that generate immunosuppression.

People who work in environments with fumes, asbestos, mining products, and other harmful compounds are more prone to these types of illnesses.

What is the diagnosis?

According to previously cited sources, bronchiolitis is suspected in children under two years of age with symptoms of cough and low-grade fever and who are in a community where there is an outbreak of respiratory syncytial virus. Of course, these suspicions are supported by physical examinations of the infant.

The case of bronchitis is more complex, as it is more likely that the patient (due to age and occupation) may present other pathologies. This doctors can diagnose the disease with a chest x-ray, sputum tests, and an analysis of the patient’s lung function.

Can you prevent it?

It is necessary to point out that bronchiolitis moves in epidemiological peaks. Due to a virus, it transmits among infants in the months of November to March. Therefore, beyond the common hygiene rules, avoiding infection is quite complex.

In any case, in any case, for an adult the best prevention is not to smoke. According to the American Cancer Society, smoking permanently damages the bronchial tree and predisposes it to various infections and ailments.

Bronchiolitis is a pathology with young children and is almost always due to viruses, while bronchitis has a broader etiology, from viral agents to smoking. These large differences already separate the most affected populations.

Don’t forget to SHARE what causes bronchitis and what bronchiolitis with your friends and family on your social networks! 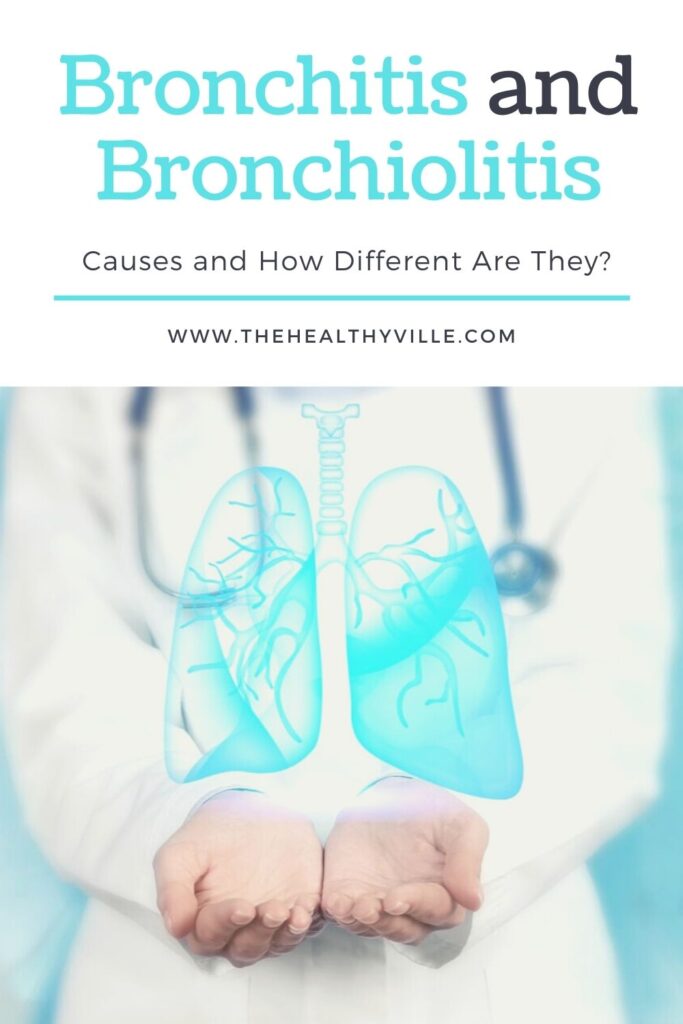