Home Health What Is Hepatic Angioma and How to Recognize the Signs?

What is hepatic angioma? What do you need to know about it? How to treat it? Learn everything there is to know!

Hepatic angioma is a benign tumor located in the liver. Its size usually ranges between 2 and 5 centimeters, although sometimes it can be larger, in which case it is a giant hepatic angioma.

Hepatic angioma is a benign tumor mass (not cancer) that arises in the liver, formed by an accumulation of blood vessels in the area.

If you want to know its symptoms, its diagnosis and its possible treatments, you have to read this article. Likewise, we must advise you to consult your doctor if you think you may be facing a serious health problem.

What is hepatic angioma?

Hepatic angioma, also called hepatic hemangioma or cavernous hemangioma, is the most common of benign liver tumors, with an incidence of up to 20%, as indicated in the MSD Manual.

It is a normally small tumor (less than 5 centimeters) formed by a proliferation of vascular endothelial cells, that is, the cells that make up blood vessels.

The causes of the appearance of hepatic angioma are not entirely clear. In many cases, it is a congenital anomaly, which means that you are born with it. In addition, in 10% of cases the angioma can be multiple.

There is a case that occurs in babies, benign infantile hemangioendothelioma or multinodular hepatic hemangiomatosis. Doctors link it to heart failure and death in infants.

Which are the symptoms?

As Mayo Clinic experts point out, in most cases, liver angiomas are asymptomatic. Its detection usually occurs during a medical examination aimed at detecting another type of condition.

Although hepatic angioma can be diagnosed at any age, it is most commonly found between the ages of 30 and 50. It is also usually diagnosed more in women than in men.

In rare cases, hemangiomas can cause bleeding or interfere with the proper function of the liver. This usually occurs in a low percentage of cases, in which the hepatic angioma ruptures.

When the angioma is larger than 5 centimeters, it is often referred to as a giant angioma. In these types of conditions, it is more common to present some type of symptom, due in part to the size of the tumor, which can compress adjacent organs.

In these cases, some of the symptoms that can be observed are the following:

In the case of babies, it is usually detected before 6 months by symptoms such as:

How do you arrive at your diagnosis?

The diagnostic method for hepatic angiomas usually involves imaging tests. The asymptomatology of this condition makes the diagnosis impossible unless a doctor tries to detect another type of pathology.

Some of the image analyzes in which the presence of a hepatic angioma can be revealed are:

What complications could it lead to?

Although in the vast majority of cases, hepatic angioma does not usually lead to problems and people who suffer from it can live with the tumor without presenting any type of symptoms, there are specific cases in which the condition can cause complications.

Again, these complications usually occur in cases in which the angioma exceeds 5 centimeters (giant angiomas). The most serious complication occurs when there is a spontaneous rupture of the angioma.

Spontaneous angioma rupture occurs in only 1% of cases, however, this complication can be very serious and requires prompt treatment, as it causes great blood loss and can cause hypovolemic shock.

Some complications for women

Another aspect that you must take into account is that substances such as estrogens can cause tumor growth. This is the reason why there is a higher prevalence in women than in men.

Specifically, in women with liver angiomas who become pregnant, the increased amount of estrogen in their body can cause further tumor growth.

Other factors, such as birth control pills or hormone replacement therapies, may be related to the growth of the angioma. However, there is great controversy over this statement, which makes an individualized assessment necessary for each case.

This very rare syndrome, which affects mainly children, due to the formation of giant hepatic angiomas and the appearance of coagulopathies.

The existence of a coagulopathy implies that the blood does not clot normally. The reason for this alteration is that platelets, cells participating in coagulation, remain trapped in the tumor and are destroyed.

Patients affected by this syndrome suffer continuous and severe bleeding. This condition is actually a different variety of hepatic angioma, albeit with certain common features.

What is the treatment for liver angioma?

Treatment of liver angioma involves surgery. Through a surgical intervention. The doctors remove the tumor.

However, the vast majority of hepatic angiomas do not require this intervention, since its presence does not pose a risk to the person who suffers from it.

Thus, surgery is for cases in which the angioma produces pain symptoms in the patient or complications that affect the proper functioning of the organs, something that occurs with greater probability in cases of giant hepatic angioma.

Once you know what liver angioma is, do not hesitate to consult your doctor if you think you have a health problem. He will know what to do in any case.

Don’t forget to SHARE what is hepatic angioma with your friends and family on your social networks! 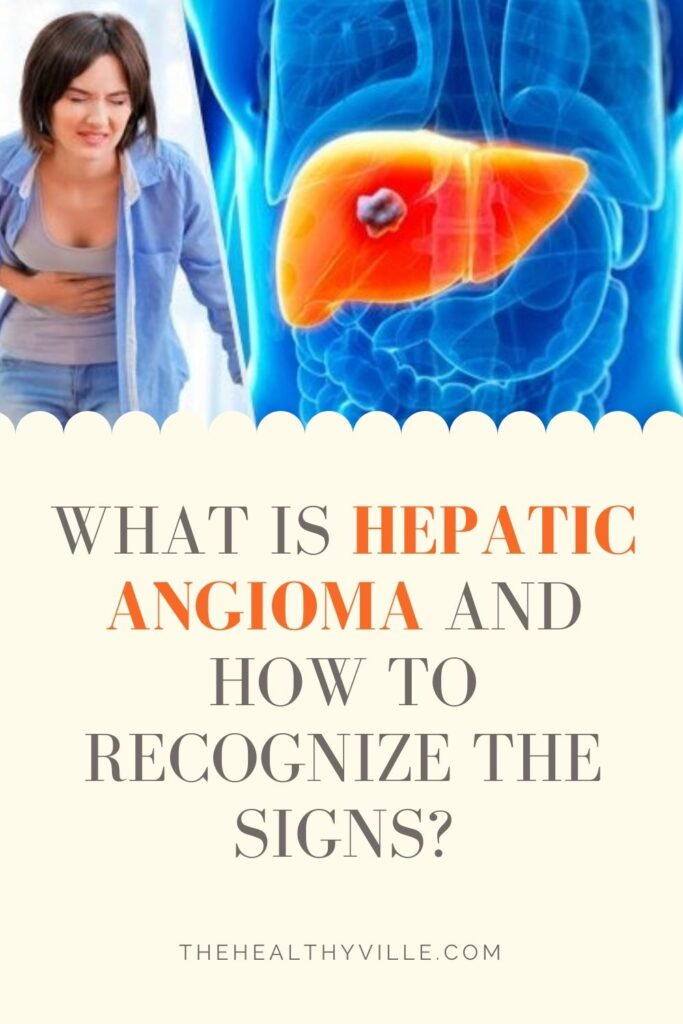