Blepharitis is a pathology consisting of inflammation of the free edge of the eyelid. It is necessary to treat it correctly to avoid complications.

Blepharitis is defined as inflammation of the eyelid margin. It is important to remember that at the edge of the eyelid there are several glands responsible for secreting substances. Some of these glands produce fat, this type is known as Meibomian glands whose dysfunction is the most frequent cause of blepharitis.

When the Meibomian glands become clogged, proper drainage of the secretions can not be carried out and typical bacteria of the skin proliferate. As a general rule, it affects the patient’s two eyelids. Above all, the region where the eyelashes are born. This is because it is the most frequent location of Meibomian glands.

Currently, blepharitis is one of the most frequent visual alterations. Likewise, it affects male to female sex equally. On the other hand, it may appear during any period of the patient’s life.

What are the most common symptoms of blepharitis?

Generally, patients with this disorder develop a series of characteristic signals. The most important symptoms are:

Red eyes and constant tearing. Also, the individual may show dry eyes due to alterations to keep the eyeball hydrated.

Swelling in the eyelids. They also tend to acquire a reddish hue and a greasy texture.

Frequent flicker accompanied by a stinging or discomfort. The patient describes this sensation as having sand in the eyes.

Other symptoms also quite frequent include:

Alterations in the eyelashes. As a general rule, there is a loss of eyelashes or they are born in the wrong direction (deviated eyelashes).

Skin dry and peeling in the areas near the eyes and on the eyelids. If the problem remains over time, it is possible that scars will appear in the long term.

Presence of hard legañas in the form of crust in the mornings.

Stye. It is a lump that is located in the birth area of ​​the eyelashes. It is usually the result of an infection in the area and causes discomfort in the subject.

Chalazion. When the sebaceous glands become infected, a lump is formed that includes both the external and internal part of the eyelid. In this case, the result is inflammation of the eyelid and usually presents a reddish tone.

Conjunctivitis on a regular or chronic basis.

Problems in the cornea resulting from irritation of this layer or other related injuries.

What are the possible causes of blepharitis?

Currently, the medical team has not been able to identify the exact cause of this disorder. However, specialists claim that there are a number of factors or triggers of blepharitis. In this way, the most frequent causes are:

Obstruction of the sebaceous glands of the eyelids. This alteration is usually due to a bacterial infection. It is also possible that its operation is not suitable for unknown reasons.

Seborrheic dermatitis or other skin disorders such as rosacea.

Presence of mites, lice or other living things on the eyelashes that may damage this region.

Allergic reactions to eye compounds such as medications, makeup, etc.

Further info: To Cure An Infected Stye In Eye Naturally, Use One Of These Homemade Remedies!

What is the most appropriate treatment for blepharitis?

First, the doctor will diagnoze of blepharitis (the medical team will use a series of medical tests to do so). Next, the specialists will study the most appropriate treatment options for each patient. Among the most used therapeutic methods are:

Treatment of the underlying disorder. This is the case of rosacea and seborrheic dermatitis.

Antibiotic drugs to treat bacterial infection in the sebaceous glands. They are usually applied locally (using drops or creams), but there are those that you can take orally, as well.

Anti-inflammatory drugs to reduce swelling in the eyes. They are in the form of drops or ointments.

Use of artificial tears in the case of dry eyes.

Another important treatment is personal care. There is a procedure you should do two to four times a day and consists of the following steps:

Place a compress or wet gauze on the eyelids for a few minutes. In this way, the crusts come off easily when removed with a new damp cloth.

Clean the edge of the eyelid by rubbing gently with another compress with water.

Rinse abundantly with warm water. Finally, to dry the area correctly you will give smooth strokes with a clean towel.

Don’t forget to SHARE the symptoms of blepharitis and what you can do about it with your friends and family on your social networks! 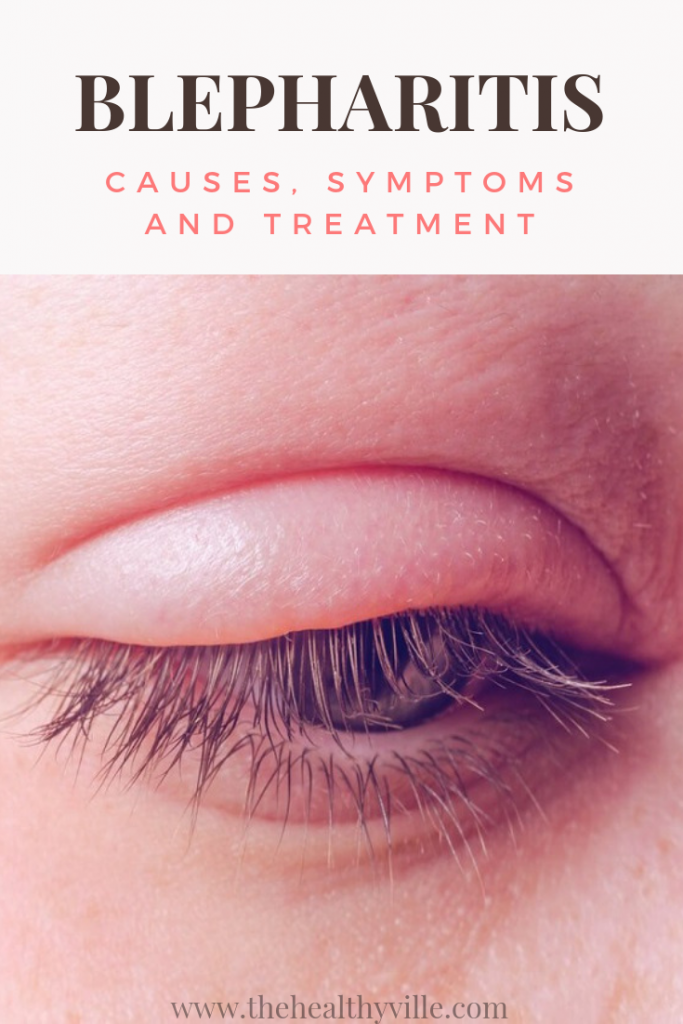