Common causes of chest pain are many, so learn about the symptoms you need to recognize in order to get the best treatment options.

Chest pain is considered to be any pain that is located between the neck and the abdomen. Its causes are very varied and, basically, they can be cardiological or non-cardiological. In this article we describe its characteristics and where it can come from.

Chest pain, to be classified as such, must be located in the anterior area of ​​the trunk of the human body. Precisely, you should feel it in some area between the neck and the abdomen. Some describe it as pain, others as discomfort. You can also interpret it as a tightness in the chest.

This chest pain can come from any structure in the chest. It can be pain originating in an organ, such as the esophagus, or in the chest wall, from the muscles, ribs or nerves. And it is possible that it radiates, spreading the pain to the neck, upper limbs or even to the face.

At times, chest pain begins as a pain in the back and you first feel it in the back. This will depend on the specific origin of the pathology that generates pain. In any case, to be considered from the thorax, it must manifest itself in the front.

It is a pain that people fear very much. Unconsciously, it is always in association with a heart problem; hence the fear. Approximately 5% of emergency department visits are attributed to chest pain. In pediatrics it is less frequent, constituting less than 1% of emergency consultations at that age.

Chest pain is usually divided into two large groups: that of cardiac origin and that of non-cardiac origin. This allows clinicians to quickly differentiate between pain that requires urgent attention and pain that can be managed less quickly.

Ischemic disease: chest pain is the fundamental sign of angina pectoris and myocardial infarction. It is a very intense, disabling pain, with a feeling of tightness. Its location is in the heart area and radiates to the upper limbs and up to the neck. It represents an absolute urgency.

Aortic rupture: Although the aorta artery has a thick wall that supports high pressure, it can rupture. It is a rare clinical situation, aortic dissection, and causes severe pain. It also requires urgent care.

Pericarditis: The lining of the heart is the pericardium. Due to various circumstances, it can accumulate fluid and become inflamed, producing pericarditis. Pericarditis is A chest pain that can be intermittent and usually changes according to position.

Pneumonia: infection of the lungs with microbial agents causes chest pain. The pain may be continuous and intensify with coughing or respiratory movement. In general, it is a pain in one side, coinciding with the infected area.

Pulmonary embolism: The veins and arteries of the respiratory system can become clogged in a condition called pulmonary embolism. These clots can form in the lung itself or come, through the circulation, from other parts of the body. It is a situation of extreme urgency as well.

Pleurisy: the pleura is plausible with inflammation. This is pleurisy or pleurisy. As with pericarditis, the pain is intermittent and can vary with changes in posture.

Pain originating in the digestive system

Esophageal spasm: the esophagus runs through the center of the thorax to communicate the mouth with the stomach. As it is a hollow organ whose wall is muscular, it may spasm. In spasm, the esophagus closes in on itself causing chest pain and preventing the passage of food.

Gastritis: although the stomach is located lower, sometimes gastritis and dyspepsia manifest pain upwards, in the chest. Gastritis is not only painful, but is often accompanied by digestive signs, such as belching, reflux, and nausea. Chest pain from GERD feels like a painful tie in the center of the chest.

As we said, in addition to the organs of the thorax and abdomen, other structures and other situations can cause chest pain. It will always be necessary to rule out the most serious origins of the pain, before proceeding to the diagnosis of the other causes that you can treat with less urgency.

Among these causes we have:

Causes of psychogenic origin: the panic attack, for example, in which the pain comes from psychology and not from anatomy. There is a feeling of tightness and discomfort in the chest that does not respond to an organ or its malfunction.

Costochondritis: it is the inflammation of the cartilage that joins the ribs to the sternum. It can come from stress or trauma, although not always. Its treatment is very easy with anti-inflammatories and local cold.

Myalgia: The intercostal muscles that make up the chest wall can hurt, either from strains, tears, bruising from trauma, or inflammation. In general, the treatment is also basically with anti-inflammatories.

Neuritis: the nerves that run between the ribs can become inflamed and cause chest pain. A classic example is herpes zoster, in which the viral infection manifests as severe, burning pain that runs along the path of the affected nerve.

Don’t forget to SHARE about the common causes of chest pain with your friends and family on your social networks! 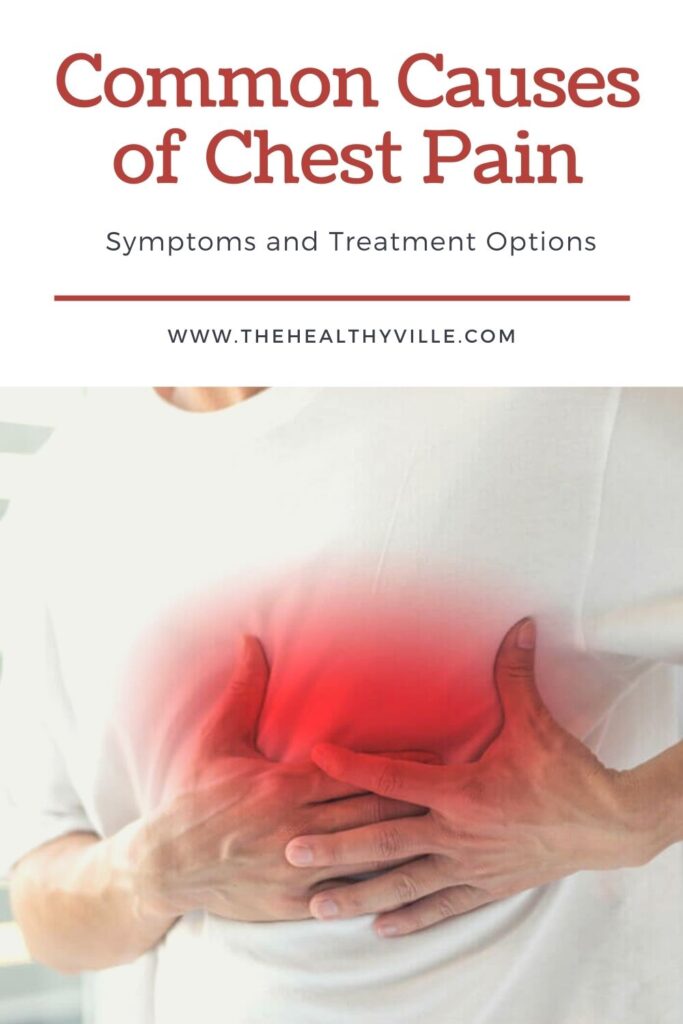