Home Health How Do You Get Bacterial Pneumonia and Other Lung Bacteria?

How do you get bacterial pneumonia? How does the bacteria get to the lungs? Can you prevent it? Learn all of the important things!

The presence of bacteria in the lungs often causes symptoms such as coughing, pain when breathing, fever, and malaise. It is essential to know the clinical picture of bacterial pneumonia to end them as soon as possible.

Symptoms such as chest pain, shortness of breath, fever, nausea or vomiting are indicative of the presence of bacteria in the lungs. Although these microorganisms are essential for the optimal functioning of human physiological systems, their presence in these types of organs leads to clinical pictures that are serious.

Do you know why these bacteria can infiltrate in the lung area? Are you in a risk group? Knowing more about it is key when dealing with these diseases, since it allows taking preventive measures. Because of this, here we tell you everything you need to know about pneumonia of bacterial origin.

On the microbiota and bacterial activity

First of all, it is essential to remember that the bacteria that inhabit the human body are, for the most part, positive. Various microbiological studies have reported its benefits. For example, bacterial colonies in the human intestine fulfill functions such as:

The normal microbiota is defined as the set of microorganisms that inhabit the body of living beings, and perform various functions of a symbiotic or commensal nature with their host.

These colonies have both a spatial and temporal component, since their composition and presence can vary according to the place of the body where they live, and the age of the person.

The problem comes when bacteria, which do not have to be pathogenic initially, colonize internal systems that do not benefit from their presence. This is the case, for example, of pneumonia of bacterial origin that we will explain below.

Are there bacteria in the lungs?

With everything said so far, you may have come to the same conclusion as us; there are bacteria in the lungs, but not normally. Of course, like any surface in contact with the outside, areas such as the nasal cavity, nasopharynx and larynx have a bacterial community that is harmless for humans.

When these microorganisms occur in the internal respiratory tract, a clinical picture of pneumonia occurs. Regardless of age or sex, anyone can get this condition, although different statistical studies highlight that it is more common in neonates.

HIV patients are also at special risk for this disease, since it has been determined that they are five times more likely to contract bacterial pneumonia than an HIV negative person.

How do you get bacterial pneumonia?

How do you get bacterial pneumonia actually? Bacterial pneumonia is generally caused by bacteria of the Streptococcus pneumoniae species. In fact, data published in Comprehensive Pediatrics show that 40% of cases occur due to this microorganism. Now, it is possible that it also occurs before other microorganisms colonize, such as:

Neutrophils surround bacteria with their membranes and release cytokines, promoting a typical clinical picture in bacterial infections. All this could be summarized in the fact that there is inflammation in the pulmonary air sacs and respiratory distress.

Symptoms of bacteria in the lungs

According to the severity of the clinical picture and the causative microorganism, the symptoms may vary. Still, there are some signs that doctors consider general, such as the following:

How do doctors diagnose bacterial pneumonia?

According to information from the Pan American Journal of Public Health, the radiological image of alveolar consolidation is accepted as a confirmatory criterion of presumably bacterial pneumonia. In affected patients, an opacity in the lung tissue is usually observed, but this is not the case in all cases.

In times of suspicion, doctors can also perform cultures of the patient’s expectorations can to confirm the presence of bacteria.

What is the treatment?

As in all cases of bacterial infections, antibiotics will be the drugs of choice. The doctor, after determining whether it is Gram positive or Gram negative bacteria, may suggest the use of several medications, such as amoxicillin, cephalosporin or doxycycline.

As there are various treatments, it is necessary to establish the exact gender of the microorganisms causing the disease. With this information, it is possible to choose the most effective therapeutic options for each case.

What to remember about bacteria in the lungs?

Strange as it may be, according to the American Lung Association, there is a vaccine against pneumonia caused by Streptococcus pneumoniae, the most prevalent pathogen.

Doctors recommend it for infants under two years of age, and for adults over 65, as they are typical vulnerable groups. In addition, at the risk of contracting it in another age range, the prognosis is positive if it is treated early and complications do not occur.

Bacteria are essential microorganisms, as they provide protection against pathogens in many of the body’s systems. However, its lack of control can cause health problems.

Therefore, with any suspicion of bacterial infection, it is essential to see a doctor immediately. With prompt treatment, the chances of overcoming the bacterial disease are quite high.

Don’t forget to SHARE how do you get bacterial pneumonia with your friends and family on your social networks! 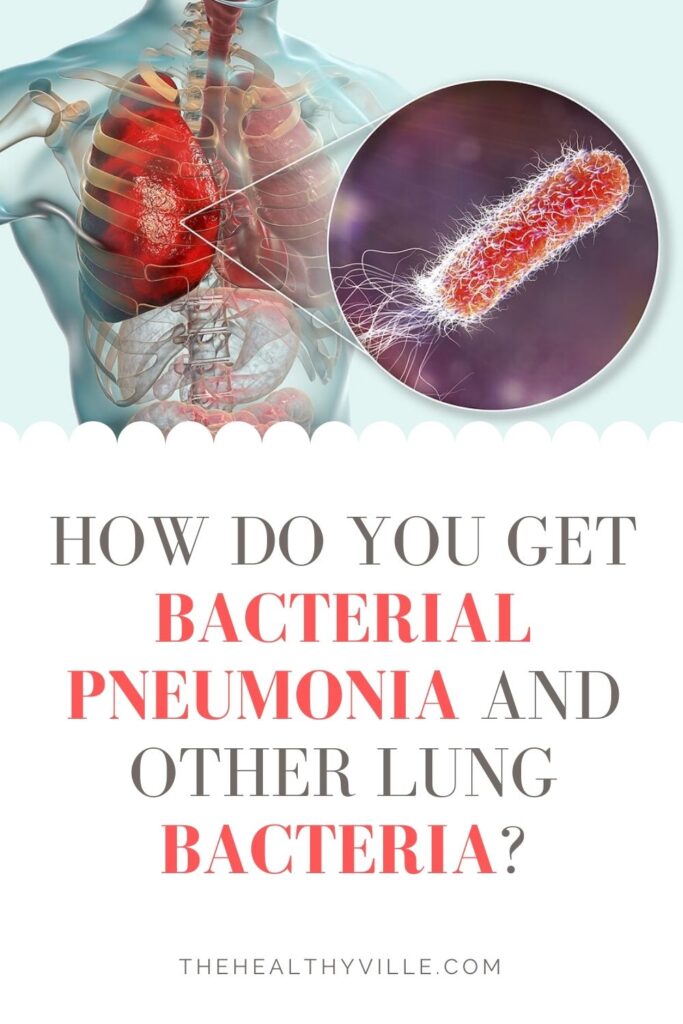