Home Health Giant Cell Arteritis Diagnosis: What Is This Disease?

It is not easy to make giant cell arteritis diagnosis. That’s why you need to know the symptoms before you report them to your doctor.

Temporal or giant cell arteritis causes pain and tenderness in the temple area. In addition, it can cause fever, blindness and pain in other areas of the body.

Giant cell arteritis, Horton’s arteritis or temporal arteritis is a vasculitis of large caliber arteries. That is, it consists of an inflammation of the blood vessels.

It is a systemic disease. However, it mainly affects one or several branches of the carotid arteries. In particular, to the temporal arteries, hence its name. Temporal arteritis is the most common vasculitis in adults. It usually affects people over 50 years old. In this article we explain what it is.

Why does it happen?

What happens in temporal arteritis is that the lining of the arteries becomes inflamed. This causes them to swell, reducing the amount of blood circulating in the vessel.

The causes of inflammation of these arteries are unknown. It is believed to be the product of an abnormal attack of the immune system on the arterial walls. In addition, it seems that the disorder has some genetic influence. There is probably a genetic predisposition to suffer it.

Cell aging may also be involved in its pathogenesis. Elastin, when altered, could stimulate the immune system, which is the protagonist.

There are certain factors that could influence the development of temporal arteritis:

The predominant symptom in temporal arteritis is headache. It usually occurs at the temples. It also highlights the sensitivity in the hair of this area. The pain does not follow a fixed pattern. It can progressively worsen, appear and disappear, or even temporarily diminish. There are other symptoms that may appear:

Some symptoms, such as stiffness or pain in the shoulders and hips, are related to polymyalgia rheumatica. It is a disorder that is confused with temporal arteritis.

It is not easy to find the right giant cell arteritis diagnosis. First, doctors must rule out other pathologies with similar symptoms. It is essential to carry out a good clinical history.

In addition, the doctor must perform a thorough physical examination in order to make giant cell arteritis diagnosis. You will find palpation sensitivity in the temporal arteries. It is also perceived that the pulse is reduced.

However, it is advisable to carry out additional tests. Ideally, perform a blood test first. In it, C-reactive protein is valued more closely. It is a substance that rises in blood when there is an inflammatory process.

You can also perform image tests. Positron emission tomography stands out. With it you can see the areas of inflammation. Similarly, Doppler ultrasound and magnetic resonance angiography are used. With Doppler ultrasound images of blood flow are obtained. In addition, it is a minimally invasive test.

However, the best method to confirm the diagnosis is biopsy. Doctors take a sample from the temporal artery. For this, they use local anesthesia. They analyze the sample in the laboratory. If the patient suffers from temporal arteritis, cells with a large size will be observed.

The main treatment is based on the administration of corticosteroids. Mainly, on prednisone. In fact, it is usually used before confirming the diagnosis. Normally, the symptoms improve after a few days. However, the duration of the treatment is one or two years. Doctors will decrease the dose of prednisone gradually during this period.

Similarly, it is important to know that corticosteroids have numerous side effects. These include osteoporosis, high blood pressure and weakness. To counteract these effects, there are a series of measures:

In conclusion we can say that temporal arteritis is a complex pathology. For this reason, it is necessary to know their symptoms and see a doctor whenever there is any doubt.

Don’t forget to SHARE the giant cell arteritis diagnosis and symptoms with your friends and family on your social networks! 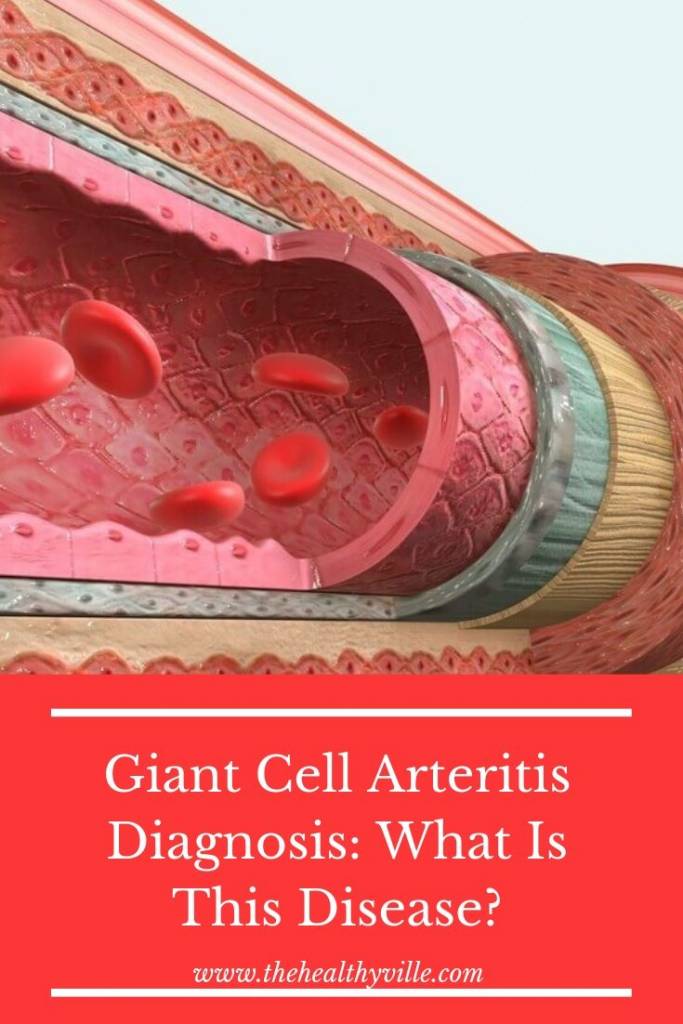