Home Health How Fast Does E Coli Manifest Symptoms and How to Recognize Them?

How fast does E coli manifest symptoms? Will you be able to recognize them on time and treat them properly? Find out the answers!

The E. coli bacteria can cause well-known illnesses, such as traveler’s diarrhea. Although it can manifest itself in many other ways, urinary infection and food poisoning are the most common pathological forms.

Escherichia coli infections are the most common cause of the syndrome known as traveler’s diarrhea. Beyond this, diarrhea is a serious problem in low-income countries, since according to the World Health Organization (WHO), more than 500,000 children die each year from this disease.

On a more global scale, this same source estimates that 1 in 10 people in the world is affected at any given time by a foodborne disease (FAD), which translates into the loss of 33 million years of life healthy globally. Of course, we are facing a more thorny issue than it seems at first.

For all these reasons, we present the characteristics of Escherichia coli infections – the enteric bacteria par excellence – and how to recognize them.

Before describing the pathology itself, we have to know the causative agent. E. coli is a bacterium that is part of the family of Enterobacteriaceae. This group contains more than 30 genera and 100 species of gram negative microorganisms, which are part of the intestinal microbiota of humans and other animals.

It is a facultative anaerobic bacterium —which can develop in the presence or absence of oxygen— commensal, that is, it does not cause harm to the host. Unfortunately, throughout its evolution, pathogenic strains that produce various clinical pictures have appeared.

What are infections does it cause?

According to the professional portal MSDmanuals, different strains of E. coli can cause urinary, enteric, invasive or other infections. We present them to you in the following lines.

The bacteria that we are investigating today are found in the intestines of people. However, some strains have acquired mutagenic genes and can cause diarrhea. Among them we find the following:

According to the Kidshealth.org portal, bacteria are the most common cause of urinary tract infections. Various strains of E. coli present in the intestine and on the skin surrounding the vaginal and rectal area can infiltrate through the urethra and settle in the bladder, causing the pathology.

Among the most common symptoms of these urine infections we find the following:

According to the Spanish Society of Pediatric Emergencies, almost 15% of invasive bacterial infections are due to E. coli during pediatric age. In this type of condition, the clinical picture becomes more serious, since the bacteria can migrate to other organs and cause damage in multiple places at the same time.

This can translate into a diffuse inflammatory condition, epithelial necrosis, and ulceration of the gastric mucosa in the patient.

How to prevent these Escherichia coli infections?

The Centers for Disease Control and Prevention (CDC) show us tips to avoid any type of E. coli infection, especially in the food field. Some of them are the following:

Food care is the best prevention

Urinary tract infection is the most common manifestation of E. coli, followed by certain strains that cause characteristic gastrointestinal symptoms. In countries with an adequate sanitary infrastructure, these pathological episodes resolve quickly, but there are geographic regions in which mortality is very high due to preventable causes.

Therefore, the best cure lies in prevention: sanitizing kitchen materials as much as possible, treating all foods, avoiding the intake of non-chlorinated water and washing hands before any contact are the best containment barriers against the pathogenic strains of this microorganism.

Don’t forget to SHARE how fast does E coli manifest symbols with your friends and family on your social networks! 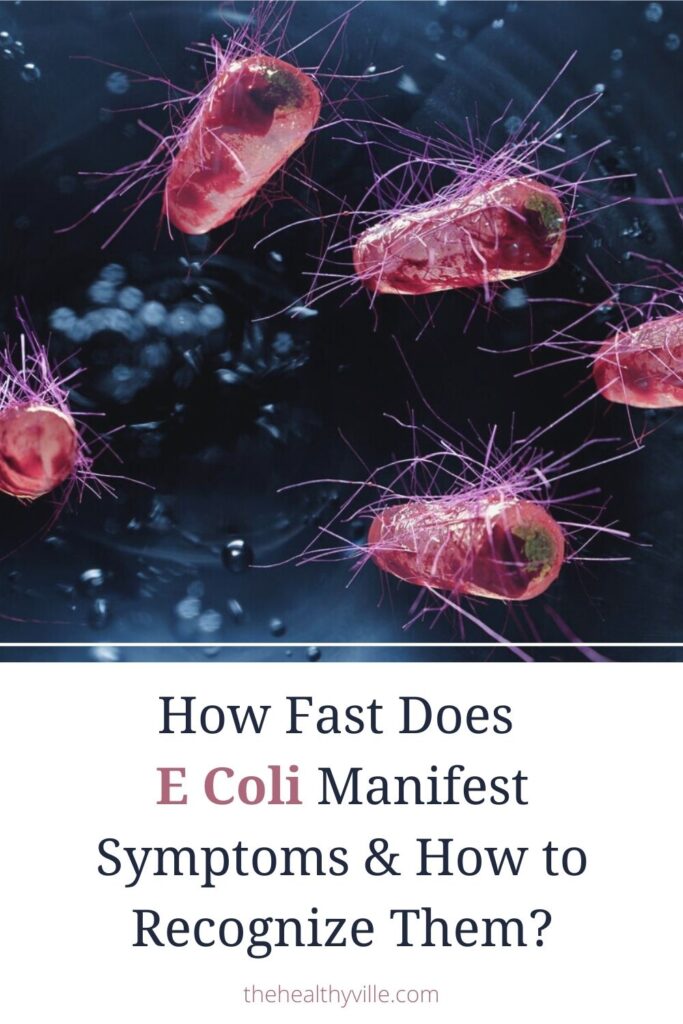