Home Health How to Get Rid of Breast Cysts and Why Do They Form...

How to get rid of breast cysts? Is there a way to do it naturally or is there a need for surgery? Why do they appear in the first place?

Breast cysts are benign formations formed by the accumulation of fluid in the mammary glands. It is important to note that a breast cyst is not the same as breast cancer.

One of the biggest fears of women and men today is that of developing breast cysts or directly breast cancer at some point. However, the appearance of a breast cyst is not synonymous with breast cancer.

Cysts are formations that must be rigorously analyzed and controlled to avoid long-term complications. In order to fully understand what a breast cyst is, it is important to know what a cyst is and how it forms.

Regular medical consultation, as well as periodically palpating the breasts to detect any abnormality, is the best way to detect the appearance of breast cysts in time.

What is a cyst?

In the field of medicine, a cyst is known as an accumulation of fluid that is surrounded by a membrane. Thus, it becomes a kind of bag or sack.

Many women describe the sensation as a kind of water-filled balloon that can be easily distinguished by palpating the breast. The breast cyst refers to a benign formation, in a circular or oval shape, which is located in the breast tissue.

What are breast cysts?

Breast cysts originate when the mammary glands grow abnormally. An accumulation of fluid is generated and therefore the formation known as a cyst. Women of any age can get them. However, the most common range of incidence is 30 to 50 years.

How are they formed?

Approximately, there are between 15 to 25 mammary lobes. These in turn contain the glands responsible for the production of milk during pregnancy, in the case of women. Each lobe is surrounded by fatty tissue, which drains through a duct called lactiferous that goes directly to the nipple.

The cysts are formed due to an obstruction of the lobular ducts, a portion of the lactiferous ducts close to the mammary lobes; Said obstruction generates an accumulation of liquid and consequently the formation of the cyst.

Cysts can form for different reasons. The most normal thing is that they form naturally, without any cause that triggers them. However, there are many factors that can contribute to its formation.

Consuming foods such as coffee, chocolate or sugary soft drinks predisposes them to form more easily. Similarly, the consumption of drugs, alcohol, tobacco and obesity, contribute to the appearance of cysts.

There are mainly 2 types of cysts: microcysts and macrocysts. The differences are shown below:

As a general rule, cysts are diagnosed using ultrasound, an excellent technique to detect structures with fluid inside. Once the ultrasound is done, the results show two characteristics that allow the cyst to be identified as:

Complex cyst: It is known to have a thick structure and a lumpy appearance. They are rare and typically occur in 5% of the population.

Simple cyst: known for having a soft, thin-walled structure and clearly liquid content.

If the cyst is large enough, the doctor will most likely try to remove the contents. If the cyst disappears, it is due to an obstruction. However, if it contains traces of blood, it should be studied immediately, since it may be a symptom of major problems such as breast cancer.

How to get rid of breast cysts?

There is no treatment for breast cysts. If a kind of lump appears in the breast, it is advisable to see a doctor. The doctor will make sure that it is a benign formation and will try to extract the content to remove the cyst.

On the other hand, it is important to remember that periodically palpating the breasts will help detect any abnormality and prevent the appearance of breast cysts.

Don’t forget to SHARE how to get rid of breast cysts with your friends and family on your social networks! 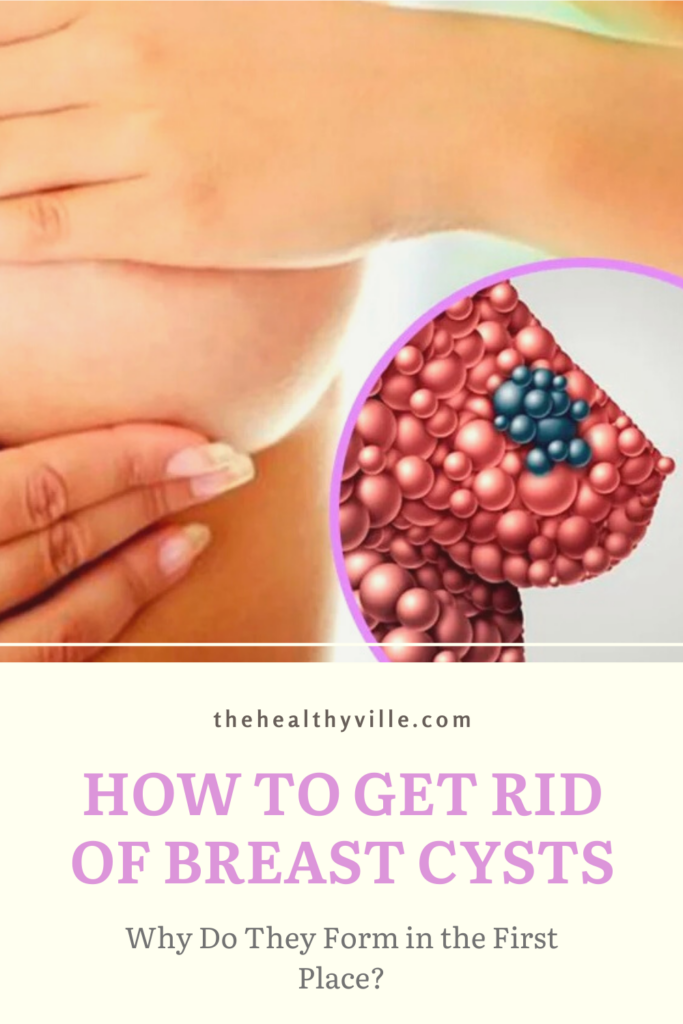