Home Health Is Psoriasis Dangerous? Can You Control It with Food?

Is psoriasis dangerous? Did you know that the consumption of some foods can help you reduce the presence of its symptoms?

Psoriasis is a skin condition that affects approximately 2% of the world’s population. Its main symptom is irritated and reddened skin with whitish plaques. Now, what can we do to minimize these symptoms? Is it possible to follow a diet to control psoriasis? Is psoriasis dangerous?

While changing your eating habits won’t cure the condition, it can help reduce the presence of symptoms. For this reason, below we will present you those permitted and prohibited foods that could prevent your symptoms from exacerbating.

How to control psoriasis and its relationship with diet

A change in diet may help you control psoriasis symptoms.

A study published in May 2017 in Dermatologic Therapy looked at the dietary backgrounds of more than 1,200 members of the National Psoriasis Foundation. The results revealed that some foods seem to intensify psoriasis symptoms while others minimize or suppress them.

In general, most of the interviewees followed a diet:

On the other hand, a large percentage of the patients studied claimed to follow a diet to control psoriasis quite successfully. Among those mentioned, the Pagan diet, the vegan diet, the Paleo diet and, to a lesser extent, the Mediterranean, vegetarian, gluten-free and low-carbohydrate/high-protein diets stood out.

Here’s a list of foods that can help control psoriasis based on dietary recommendations published in JAMA Dermatology.

The antioxidants and beta carotene in vegetables and fruits can be beneficial to take care of yourself against psoriasis.

These foods provide essential nutrients in the diet to control psoriasis, such as vitamin A or beta-carotene, antioxidants and minerals such as zinc, selenium and magnesium. Some vegetables and fruits that you should include in your daily diet would be:

Omega-3 fatty acids are famous for their anti-inflammatory effect, according to a study published in the International Journal of Molecular Sciences. Do not hesitate to include foods rich in this component in your diet. Among them we can find:

Fiber and probiotic intake is extremely important. If you want your body to properly absorb nutrients, you must maintain good intestinal health.

Thus, we recommend that you choose whole foods over those made with common flour.

Regularly consume rice, wheat, millet, oats and their derivatives such as flour and bread. In addition, you can include kefir and yogurt in your menu, due to their probiotic content.

Some research has concluded that the consumption of vitamin D could be beneficial to control inflammatory diseases such as psoriasis. How about including foods such as oily fish, eggs and sunflower seeds in your diet?

In reality, not all these foods are prohibited, in some cases only a moderate and conscious consumption is recommended. Let’s look at each one in depth.

There are no conclusive data that allow us to speak of a ban on drinking alcohol when suffering from psoriasis. However, moderate consumption is often recommended, as some research has suggested that treatments are not as effective when combined with alcohol intake.

If your medication includes methotrexate and acitretin, you’ll probably be told to abstain from alcohol.

Psoriasis is an inflammatory disease. For this reason, in the diet to control psoriasis, it is advisable to eliminate industrially processed foods with low nutritional value, such as margarines, instant soups, soft drinks and sauces.

The processed ones usually contain omega 6 and trans-type fatty acids in their composition. Both lipids have been shown to have inflammatory properties, which is counterproductive in the management of the pathology.

Specialists usually prescribe a diet low in red meat, mainly avoiding the fattier cuts. This is because this kind of meat could raise the number of cytokines, aggravating the symptoms of psoriasis.

Like red meat, these two drinks increase the number of cytokines, the cellular proteins responsible for regulating inflammation. So, better refrain from consuming coffee and milk regularly.

Some studies suggest that a large part of the population suffering from psoriasis could also be allergic to gluten. In this sense, there are conflicting opinions.

While some specialists prefer to prevent gluten from the diet, some research suggests that if celiac disease is not confirmed, this could be counterproductive. But, consult with your doctor about the need or not to eliminate gluten from your diet.

A pro-inflammatory diet, that is, a regular consumption of trans fats, could exacerbate the symptoms of psoriasis. For this reason, a low intake of these nutrients is recommended.

Watch your diet to control psoriasis

The diet to control psoriasis is not a cure for the disease, but a way to try to relieve symptoms. Consult a doctor and nutritionist about the best dietary changes you can make to combat this condition.

As you can see, the changes described follow the guidelines of a balanced and varied diet, away from foods that are not recommended due to their low nutritional value. So, complement with physical exercise and healthy habits to improve your health and quality of life.

Don’t forget to SHARE is psoriasis dangerous with your friends and family on your social networks! 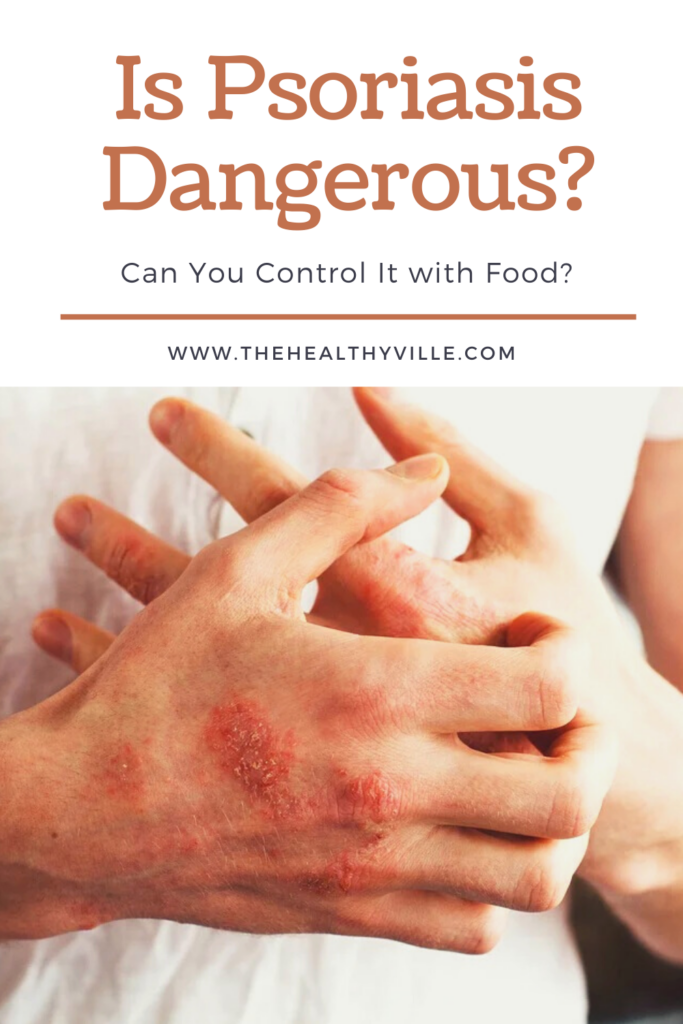