Side effects of drinking apple cider vinegar in excess can be quite uncomfortable, so besides its benefits, you should take it in moderation. We tell you more about it.

Some people are completely ignorant of the possible side effects of excess apple cider vinegar. Although this product offers beneficial health properties, its use in large quantities leads to reactions that pose a danger.

So far, there is not enough evidence on the safety and efficacy of this natural ingredient. For this reason, although it can be in the regular diet, recommendations are a moderate and punctual consumption. Do you want to know more about it?

What is apple cider vinegar?

Apple cider vinegar is an organic product that is obtained through the combination of apples with yeast. During its process, the yeast transforms the sugars in the apples into alcohol. Then, by adding bacteria, the alcohol is fermented in acetic acid to a concentration of 5 to 6%.

This acid is classified as a “weak acid” and this is responsible for many of its beneficial effects. However, the product also contains water and other micronutrients.

According to research published in Critical Reviews in Food Science and Nutrition, the acetic acid contained in apple cider vinegar contributes to lipid metabolism and lowers the risk of obesity and type 2 diabetes. So why you should not consume it in excess?

Side effects of drinking apple cider vinegar in excess

Although known as a healthy product, excess apple cider vinegar triggers serious side effects. Because of this, you should always take with caution, avoiding too high doses. Also, as far as possible, it is better to dilute it in water. What can cause?

A large consumption of apple cider vinegar can worsen the symptoms of gastroparesis. The latter is a common condition in people with type 1 diabetes. It consists of a malfunction of the nerves of the stomach, which makes it difficult to empty the stomach.

What happens is that this ingredient slows the speed with which food leaves the stomach and enters the lower digestive tract. Consequently, it reduces high spikes in blood sugar, but also slows the absorption of nutrients into the bloodstream.

Symptoms include the following:

For some people, apple cider vinegar is an irritant and causes stomach upset. Although there are studies that associate acetic acid with a greater feeling of satiety, several hypotheses suggest that this effect is the result of the indigestion that it causes.

In a study that in the International Journal of Obesity, a group of people consumed a drink with 25 grams of apple cider vinegar. In the end, they reported that they had a reduced appetite, but also an unpleasant feeling of nausea.

To date there are not enough controlled studies on the relationship between apple cider vinegar and blood potassium levels. Nor are there any about its link to increased bone loss. However, there is a publication on a case report of these effects.

Specifically, through Nephron, it was reported that a woman who consumed large amounts of apple cider vinegar, for a long time, had to be admitted to the hospital with low potassium levels and alterations in blood chemistry.

The woman consumed about 250 milliliters of apple cider vinegar diluted in water for 6 years. The diagnosis showed osteoporosis and mineral leaching from the bones. Doctors also found that excess acid could also reduce new bone formation.

Consuming excessively acidic foods and beverages causes deterioration of tooth enamel. While there are more studies on the effects of soft drinks and fruit juices, there is also evidence on the damage that acetic acid causes in this layer that covers the teeth.

A publication in the medical journal Clinical Laboratory states that vinegars can cause a loss of between 1% and 20% of dental minerals after four hours. However, the study was done in a laboratory and not in the mouth, where saliva appears to help mitigate heartburn.

In any case, the general recommendation is to avoid direct exposure of the teeth to pure undiluted apple cider vinegar.

Watch out! Consuming too much pure apple cider vinegar can cause burns in the esophagus. This is stated in a review published in Acta Paediatrica, in which the effects of the consumption of harmful liquids accidentally ingested by children were observed.

The researchers determined that the acetic acid in vinegar was the acid that caused the most burns in the throat. Therefore, they classified it as a “powerful caustic substance” that should be out of the reach of children.

There are those who state that the application of apple cider vinegar on the skin has certain benefits; however, its application in excess and without dilution seems to cause the opposite effect. In a case report published in The Journal of Clinical and Aesthetic Dermatology, a 14-year-old girl suffered nose erosions after following a protocol seen on the Internet with this product.

In another case, a 6-year-old boy suffered burns on her legs after her mother applied apple cider vinegar to her to fight an infection. It seems that these risks decrease after diluting the vinegar in water. However, recommendations are to do a little test of the product before using it on large areas of the skin.

You should not use apple cider vinegar in excess

The key to avoiding these unwanted effects of apple cider vinegar is to avoid overusing it. So far, in moderate amounts, it is safe and beneficial for most people.

Anyway, the ideal is to consult your doctor before consuming it regularly. Remember that you can sometimes have drug interactions. Therefore, it is better to avoid it in case of being under some treatment.

Don’t forget to SHARE the side effects of drinking apple cider vinegar in excess with your friends and family on your social networks! 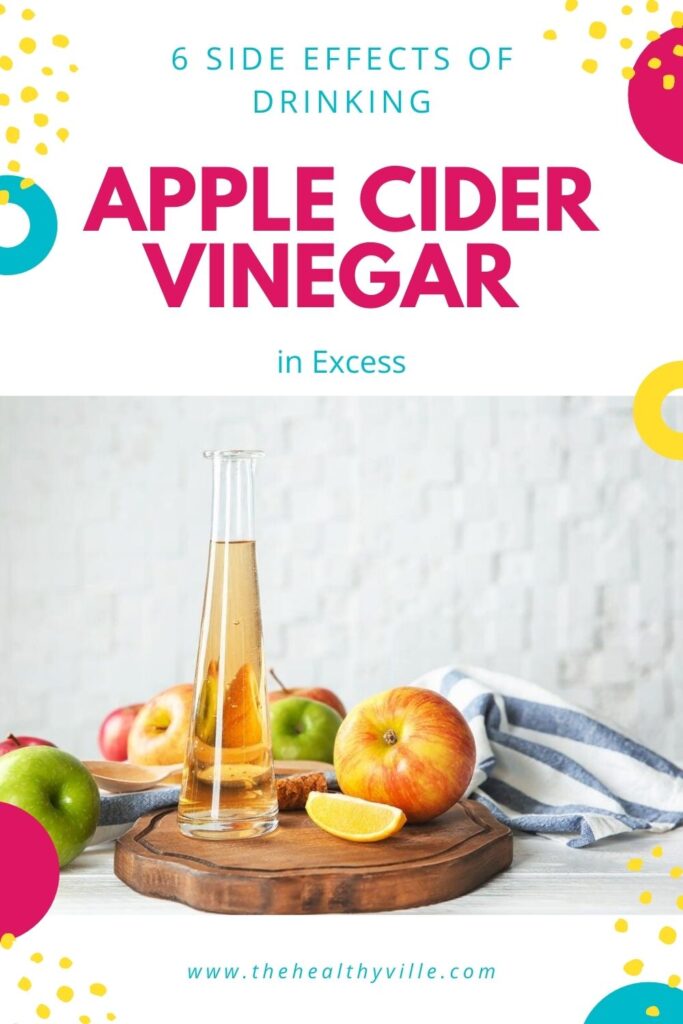