Subclinical hypothyroidism symptoms can be subtle and weird, so you should be on alert, know them and start treating them on time.

Subclinical hypothyroidism is a very frequent entity that doctors detect by biochemical analysis. Estimations are that around 8% of women suffer from it and its frequency increases with age. In fact, it is more common in women, although it can also appear in men.

It is, a stage prior to hypothyroidism, as such. Although it is true that this disorder increases the risk of clinical hypothyroidism, not all people who have the subclinical version end up developing it.

In addition, to date, despite all the research, it has not been possible to demonstrate what the real impact of the finding is. While there are detractors of its treatment, other medical schools suggest starting therapy immediately with maintenance doses, as if it were a declared disease.

What is this condition?

To understand subclinical hypothyroidism, the first thing is to explain how the thyroid gland works. This organ is located at the front of the neck. Its function is to produce hormones called T3 and T4, known generically as thyroid hormones.

In order to make them, the gland receives signals from the pituitary. It stimulates the organ with a substance that is thyrotrophin or TSH. When there is a failure in this circuit, both the T3 and T4 hormones and TSH alter and it is possible to detect their variations in laboratory analysis.

In clinical hypothyroidism, the gland cannot produce T3 or T4, so blood levels of these hormones are low. Under normal conditions, unless there is a problem in the pituitary, we will find the TSH elevated, since it tries to stimulate the gland, despite not obtaining a response.

The difference is established with subclinical hypothyroidism, because what happens in these circumstances is that the values ​​of T3 and T4 are normal. However, TSH is high. Technological advance has made it possible to detect more precisely the tenths for which thyrotrophin is not in range, and this is supposed to have increased the diagnosis, despite the absence of symptoms.

Subclinical hypothyroidism is usually a casual finding. In other words, most people do not have symptoms, even without depending on TSH level or age, and even on concomitant pathologies.

A condition of illness with few manifestations, or null, is what puts it in question. What if we didn’t have the ability to test thyroid hormone values? What happened before you had these very accurate blood detection mechanisms?

The logical thing to think is that people would go on with their normal lives without even thinking about hypothyroidism. Without symptoms it is difficult to establish the degree of severity. In any case, something similar occurs with the elevated lipids in the blood, which are asymptomatic, but no less dangerous.

Doctors try to determine through evidence whether at cardiovascular level this disorder produces risks. For instance, the study by the New England Journal of Medicine. It suggests that, by treating subclinical hypothyroidism, it is possible to improve the risk perspective of cardiac events.

This same research shows that supplementing with artificial thyroid hormones lowered cholesterol. However, this decrease could not be directly correlated with the decrease in mortality from cardiovascular causes in the same group studied.

Should you treat this pathology?

There is still no unappealable evidence that it is better to treat this pathology, rather than not. Doctors treat hypothyroidism with a drug, levothyroxine. The only benefit that has been found so far when indicating the drug to the subclinical version, has been in regard to lowering cholesterol.

In Spain, the protocol for deciding whether to treat subclinical hypothyroidism or not is based on TSH values. If the TSH is above 10 milligrams per deciliter, doctors recommend therapy. If it is above 4.5 and there are pregnancy or noticeable symptoms, too.

What we must remember is that subclinical hypothyroidism is a biochemical finding. It is important to see a doctor frequently. Even more so if you notice any symptoms, such as continuous tiredness.

Don’t forget to SHARE the subclinical hypothyroidism symptoms and treatment options with your friends and family on your social networks! 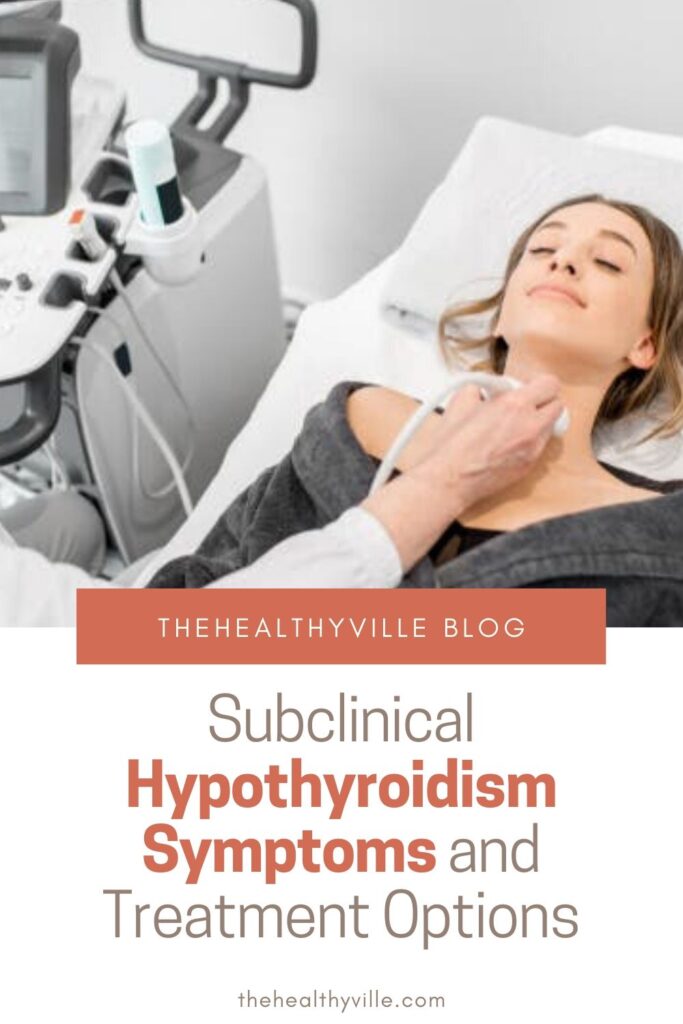