Home Health Symptoms of Wheat Allergy: How to Notice Them and What to Do?

Symptoms of wheat allergy occur because the body reacts to the proteins that this food contains. Now, who can be allergic? Find out more!

Until a while ago, the only condition that required excluding wheat from the diet was celiac disease, however, today another entity is known in which this product also generates adverse reactions: wheat allergy. What symptoms does it produce? What are your causes?

According to scientific evidence, the prevalence of this condition is low, since it occurs in 0.1% of the world population. So, as in other food allergies, the manifestations are varied. Find out more details in this article.

What is a wheat allergy?

A wheat allergy is the reaction of the body to the proteins in this food. It occurs because the body identifies them as a toxic or foreign substance.

In these people, what happens is that the immune system activates its defense mechanisms through the production of antibodies. This causes allergy symptoms. As in all these situations, sensitization occurs from birth, but can manifest itself at different stages of life.

Symptoms include the appearance of gastrointestinal, dermatological and systemic manifestations. According to various studies, these can be triggered by other wheat proteins other than gluten, however, the effects it produces are confused with celiac disease. The following may appear:

In some cases, the ingestion of wheat in allergy sufferers can cause a serious reaction, known as anaphylaxis. In it, in addition to the above problems, severe symptoms appear such as a drop in blood pressure, chest tightness, dizziness, loss of consciousness and a rapid heartbeat (tachycardia).

Thus, the risk of these complications occurring increases after exercise, since the changes caused by physical activity in the body worsen the immune response. They can happen and appear up to 4 hours after consumption of the food.

What are the causes?

The causes can be diverse. First of all, it should be clear that the introduction of wheat into the diet during childhood is a critical time, since it has a significant allergen potential.

However, even if the allergy appeared at an early age, in most cases it could resolve on its own when the child reaches school age. During the maturation process, changes in the immune system play a key role in the assimilation of substances.

Allergies that occur in adults tend to be permanent. So, according to various scientific studies, people are more likely to suffer from this problem if they come from a family in which there is a genetic predisposition.

This predisposition means if parents, siblings, uncles or grandparents have had food allergies or other common substances. As well as a history of asthma, dermatitis and rhinitis is important.

There are cases, especially in people who have a prolonged exposure to wheat, such as bakers, in which the suspended flour dust particles cause a sensitization of the organism. Consequently, due to this overexposure, an allergy occurs, which we know as baker’s asthma.

Which is the treatment?

In the case of patients with a wheat allergy, the nutritional recommendation is to exclude this food from the diet. It is not necessary that you completely eliminate products containing gluten, as in celiac disease, but you should limit products that may contain the cereal.

It is clear that flour, bread, pasta, bakery products and breakfast cereals are some examples where wheat is present. However, a significant percentage of the population is unaware that it can be an ingredient in other edibles, such as ice cream, ketchup, some cosmetics and even tea bags.

A recommendation to take into account to be sure if the product to be eaten or used contains this food, is to corroborate the list of ingredients with which it has been prepared. In this way, if wheat is included in it, it is advisable to avoid its use.

Wheat allergy is not celiac disease

Although this condition manifests itself in a similar way to celiac disease, it is not the same. In it, the person responsible for the adverse reactions in the body is wheat, which is why it is the only food to avoid in the diet.

Likewise, if you have some of the symptoms described and you suspect that you may suffer from it, it would be advisable to consult your doctor and carry out the diagnostic tests. In this way, you can be sure if it is your problem or not.

Don’t forget to SHARE the symptoms of wheat allergy with your friends and family on your social networks! 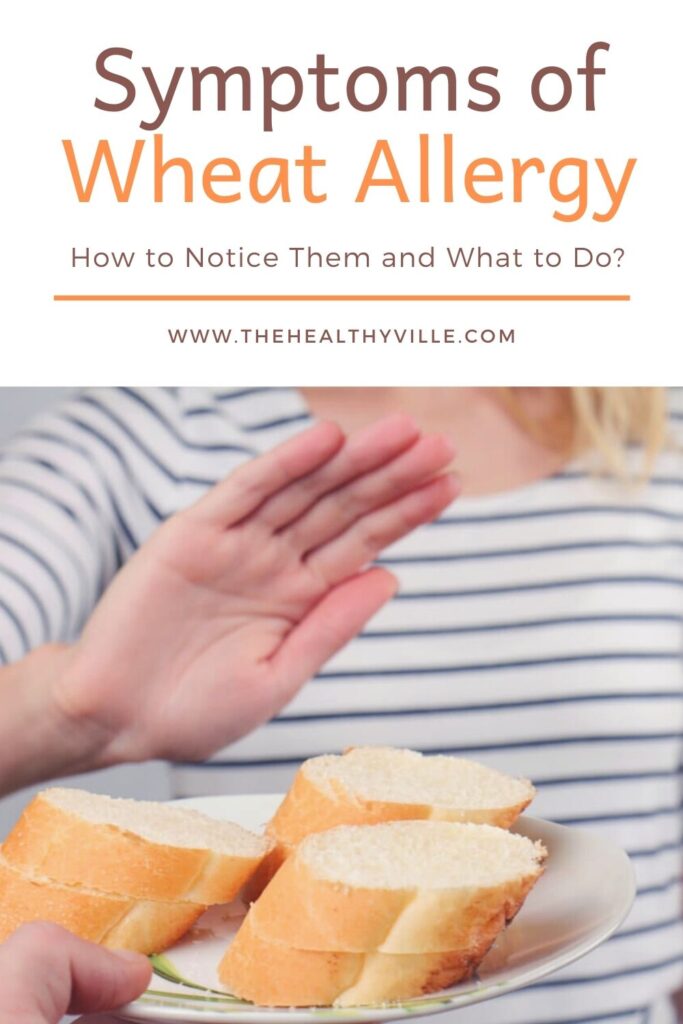