Home Health TSH Low Meaning: What Does Your Blood Test Say about Your Health?

The TSH low meaning can open your eyes about diseases you never thought you’d have. Make sure you figure it all out on time!

TSH is the hormone responsible for regulating the production of thyroid hormones. Their imbalance manifests both hypothyroidism and hyperthyroidism problems.

TSH or thyroid stimulating hormone is a molecule that is involved in possible gland dysfunctions. That is why, when we have certain symptoms related to this organ, the doctor requests a test that measures the levels of TSH in the blood.

TSH low meaning is indicative of an alteration that needs to be further studied. Often times, this test is the first of several that will follow later.

TSH is also called thyroid-stimulating hormone, or technically thyrotropin. It is released by the pituitary after stimulation from the hypothalamus through another hormone known as thyrotropin-releasing or TRH.

Once TSH is in the blood, it contacts the cells of the thyroid gland to produce two more hormones:

T3 and T4 will go to the tissues to control the metabolism of proteins, carbohydrates and fats. In addition, in babies these hormones are very important because they help the normal development of the brain tissue of the newborn.

TSH low meaning: Why does it drop?

Both disorders, taken together, would affect almost 10% of the population, and in all these patients it would be possible to find an abnormal result of TSH. The hormone in question is regulated in 3 ways:

What is negative feedback?

When your body produces many thyroid hormones, they increase their amount in the blood. The hypothalamus and pituitary detect this rise and reduce their production of TRH and TSH. This is what we call negative feedback.

That is, the hormones themselves are self-regulating in order to have stable blood levels and not be as high. If that mechanism did not happen, we would constantly go into hyperthyroidism or hypothyroidism.

Normal blood TSH levels are between 0.4 and 4 mIU / L. If they are exceeded or less than these values, it means that there is a dysfunction in the thyroid.

In particular, a low TSH means that there is so much T3 and T4 in the blood that they make negative feedback on the pituitary, preventing production. Usually, in that scenario we have hyperthyroidism.

There is also low TSH as a result of secondary hypothyroidism. This happens when there is a dysfunction of the pituitary, either because part of it has been destroyed or something is preventing it from working properly, such as a brain tumor.

Finally, it may be tertiary hypothyroidism that is to blame. In other words, the hypothalamus does not work and stops producing TRH, therefore, it does not send signals to the pituitary to produce TSH.

In the first case, when there is an overproduction of peripheral thyroid hormones, we will find very high T3 and T4 in the blood, indicating an over-metabolism. The body will start burning all the fats and sugars in the body for energy.

The symptoms of hyperthyroidism are nervousness, palpitations, hyperactivity, and increased sweating. There is also hypersensitivity to heat, increased appetite, and weight loss.

If you think you may have hyperthyroidism, see your doctor. The professional will perform blood determinations of TSH, T3 and T4. If TSH is low and thyroid hormones are high, the diagnosis of hyperthyroidism will be confirmed.

Causes can range from a thyroid tumor to an autoimmune disease, in which the antibodies are overexciting thyroid cells. There are medications that reduce and control symptoms.

Symptoms contrary to the above, such as tiredness, weight gain, cold intolerance and hypothermia, are indicative of hypothyroidism. It may be that we have tumors in the brain that destroy the pituitary, or that compress it, preventing it from releasing TSH. It can also be a low production of T3 and T4 in the gland itself.

Low TSH in the context of hypothyroidism reveals a more serious problem, linked to destruction of the pituitary. On the other hand, if the TSH is normal or high, the suspicion goes to the thyroid gland.

Don’t forget to SHARE the TSH low meaning on your blood test with your friends and family on your social networks! 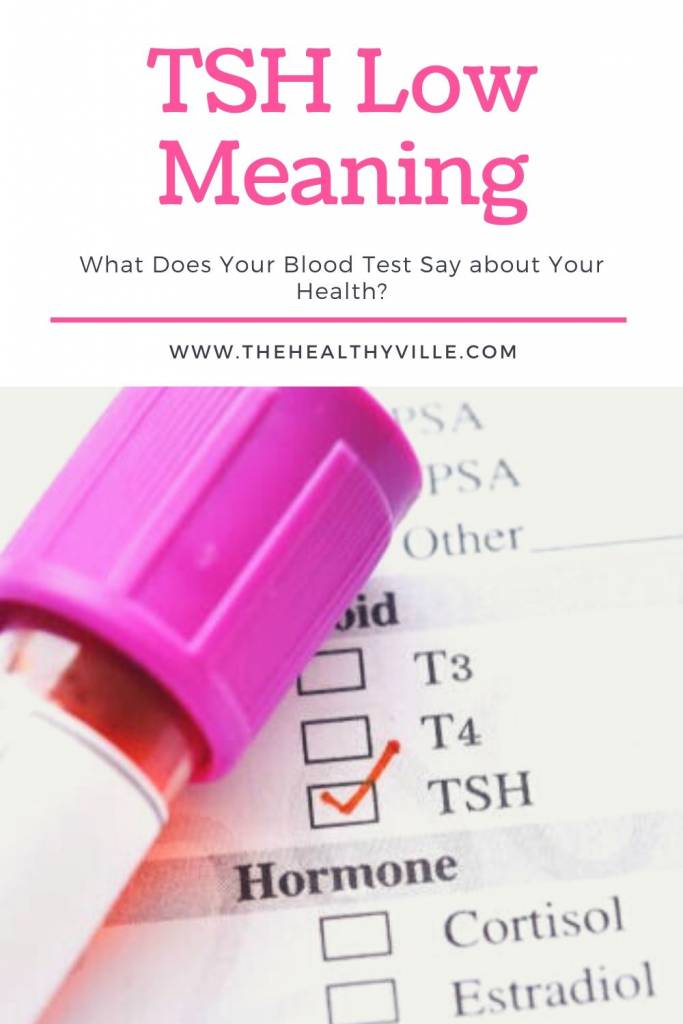 Get Rid of Mouth Sores Naturally Using These 8 Homemade Remedies!

What Is Protozoa and Which Dangerous Diseases Can It Cause?

How Much Sleep Do You Need to Prevent Brain Diseases?