Home Health What Is a Brain Hemorrhage and Why Does It Occur?

What is a brain hemorrhage? It is a medical emergency, since the mortality rate is very high and the sequelae are also very frequent. Learn why!

Brain hemorrhage is a serious situation that can endanger the life of the person who suffers it. It consists of bleeding inside the brain that causes blood to be lost and not reach all parts of the organ properly.

Therefore, it is the second leading cause of stroke or cerebrovascular accident. The problem is that the mortality of cerebral hemorrhage, despite current treatments, is still very high. In addition, sequelae are frequent in people who manage to survive.

The incidence of this condition increases as you age. However, age is not the only risk factor.

What is a brain hemorrhage?

In simple words, this is bleeding that occurs inside the brain. It usually causes sudden-onset neurological defects and even coma.

This is due to the lack of blood supply to other parts of the brain, since the blood does not continue its journey through the blood vessels. It is important to distinguish between cerebral hemorrhage and intracranial hemorrhage.

Among others that occur within the skull, but not in the brain parenchyma, we can mention, for example, intraventricular, subarachnoid, subdural, and epidural hemorrhage.

Estimations are that almost 15% of all of strokes happen due to brain hemorrhage. In addition, it presents a very high mortality, especially in the first days.

Cerebral hemorrhage, as we have just pointed out, is usually associated with a neurological defect that appears suddenly. Depending on the cause of the bleeding, it may progress very quickly (within 1 to 2 hours) or progress more slowly. In addition, the symptoms vary depending on the area that has been affected.

As in ischemic-type cerebrovascular accidents, it is usual for a loss of strength of one half of the body to appear. That is, if the bleeding has occurred in the right part of the brain, the leg and arm on the left side will be affected.

It is common for that same side to lose sensitivity or to appear tingling. Speech or the ability to understand language can also be affected. Some people lose vision in one eye.

Headache, vomiting, loss of consciousness, and even coma are common. An increase in intracranial pressure due to the cerebral hemorrhage itself is usually signaled by a headache and vomiting.

Brain hemorrhage can happen for different reasons. It seems that age is one of the most relevant factors. The incidence increases as you age and is higher in men than in women.

The main underlying cause is high blood pressure. This is because the cerebral arteries, which are small in size, are very sensitive to increased pressure.

Similarly, brain hemorrhage can be triggered by trauma. It is one of the reasons why it is more frequent in the elderly, who tend to suffer falls.

Another origin is amyloid angiopathy. It is a disease that consists of the accumulation of certain proteins in the walls of the arteries of the brain. As the arteries become more fragile, recurring bleeding appears.

The development of brain hemorrhages increases in people with blood disorders, coagulation disorders. However, in most cases they are due to the use of certain drugs, such as anticoagulants.

Brain hemorrhage can also occur in young people. For example, the use of drugs such as cocaine or amphetamines increases the risk. Similarly, arteriovenous malformations are another relatively common cause.

How to treat it?

Brain hemorrhage is a medical emergency. Any symptoms or signs should seek immediate medical attention.

The first thing to do is stabilize the patient. As with any other hemorrhage, it is essential to prevent the person from going into shock.

In addition, for the patient continues to breathe adequately, doctors need to intubate them. Similarly, platelet concentrates or fresh plasma can be given to stop bleeding. It is indicated to do so if the person was in previous treatment with anticoagulants.

Vitamin K also helps reduce bleeding in these cases. In cases where there is severe hypertension, doctors prescribe hypotensive drugs. However, lowering the tension too much aggravates the damage, so this is a delicate situation.

To treat the brain hemorrhage, in most cases, surgery is necessary. The intervention consists of extracting the accumulated blood and thus reducing intracranial hypertension. Doctors opt for it only in cases in which a progressive neurological deterioration happens due to the bleeding, or if the bleeding affects the brainstem.

A brain hemorrhage carries a very high risk of mortality. In fact, the mortality rate is around 40%. In addition, people who survive often have sequelae.

Most complications arise from the expansion of the hematoma or the edema that forms around it. Also due to the damage to brain tissue itself due to the lack of blood supply. There may be seizures, an inability to communicate, and vision problems.

Similarly, survivors often have severe headaches and loss of sensation and mobility. The prognosis is poor, although it varies depending on the severity of the bleeding.

Either way, most patients require further therapy. Rehabilitation therapies can be useful to improve speech, mobility, or to regain other functions.

Anyone who survives a brain hemorrhage needs to consider certain aspects. From that moment on, it is essential to keep a strict control of blood pressure. It is important to adopt a healthy lifestyle to prevent a new episode.

Older people with high blood pressure have a very high risk of bleeding. Hence, it is necessary to try to minimize the risk of falls and carry out frequent medication controls.

Don’t forget to SHARE what is a brain hemorrhage with your friends and family on your social networks! 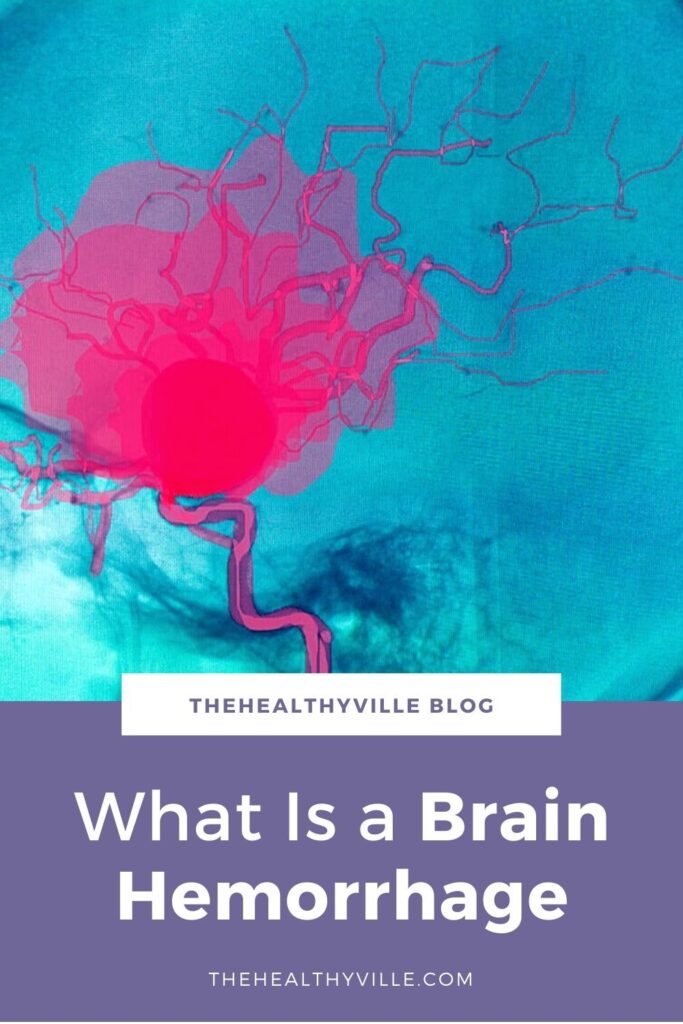