Home Health What Is Miosis and Why Does the Contraction of the Pupils Occur?

Miosis is the process of contraction of the pupil which can appear out of many reasons. Find out which and why!

The pupils can reflect the existence of a nerve injury or even guide the diagnosis of poisoning. We explain why miosis happens and what signs are alert to the possible presence of a pathological process.

The word miosis is the medical term to refer to the fact that the pupils become pinpoint. That is, it consists of the contraction of the pupil. Although it may seem irrelevant, pupil size can tell a lot about a person’s health.

This part of the eye reacts physiologically to changes in light, contracting or dilating. But in addition, its size varies when you consume toxic substances or there is a brain injury. Therefore, we explain everything you need to know about what is miosis and how it can complicate your life.

Miosis, as we have just pointed out, consists of the contraction of the pupil. The pupil is the hole in the center of the iris, that is, the dark part of the eye. It is responsible for controlling the amount of light that passes into the eyeball, towards the retina.

To do this, it can expand or contract, depending on how much light is in the environment. Thus, when the environment is dark, it dilates (which we know as mydriasis). On the contrary, when there is a lot of lighting, the pupil contracts. It is a normal and physiological reflex controlled by the parasympathetic nervous system.

These movements happen thanks to a muscle present in the eye, the ciliary muscle. When the pupil is dilated, the muscle that works is the dilator of the iris. In that case, the sympathetic nervous system is the one that coordinates the action.

As we have explained, miosis is a physiological process that occurs in response to the amount of light. However, it is not the only situation that can cause this reaction. Certain substances or diseases can cause it, such as the ones we report below.

Opioids are substances derived from opium that act on the central nervous system. They are can be both in the form of medications as well as recreational drugs. Some of them are fentanyl, morphine, heroin, and methadone.

Its action has a depressant mechanism in the nervous system. The pupils contract and hardly react to light stimuli. According to a study, opioid intoxication is characterized by miosis, respiratory and consciousness depression, among other signs.

Besides opioids, there are many other chemicals that can cause this situation. In fact, several medications have miosis among their side effects. For example, some antipsychotics, such as haloperidol. The same is true of drugs you may use topically to treat glaucoma.

Horner syndrome is a set of symptoms that appear after a nerve injury. It causes the eyelid to be droopy and the pupil to present miosis. In addition, sweating on that side of the face reduces.

According to an article published in the Acta Médica del Centro, one of the main causes of this syndrome is iatrogenesis. That is, it occurs as a result of medical failure after surgery on the face, for example, dental or therapeutic interventions applied for trigeminal neuralgia.

In some cases, depending on the area of ​​the brain that is affected by brain bleeding, miosis may occur. For example, in cases where a stroke is very extensive or when the thalamus is involved.

Pancoast tumor is a type of cancer that occurs in the lung. It can affect parts of the sympathetic nervous system, which is responsible for producing the opposite effect to miosis (mydriasis). In this way, as the pupil cannot be dilated, it remains contracted as a result of this tumor.

Read more: Subconjuctival Hemorrhage or Red Spots on the Eyes: Why Do They Occur?

How to diagnose it?

To diagnose the cause of miosis, the basic thing is to observe the general condition of the patient. Many of the etiologies that produce the symptom, such as opioid intoxication or cerebral hemorrhage, are usually accompanied by an alteration in the level of consciousness.

If they are conscious, the ideal is to ask the person if they have used any drugs or drugs. In addition, it is necessary to observe how the pupils react to light stimuli. The doctor or nurse is in charge of studying different eye reflexes to check the neurological status.

Among them is the photomotor reflex, which is to observe if the pupil contracts more when exposed to light. Another is the consensus reflex, which confirms if the pupil of the other eye also contracts. This shows whether the injury is in one of the peripheral nerves or in the upper brain area.

Miosis is a physiological mechanism that occurs in response to light. However, it can also be secondary to neurological damage or intoxication by certain substances.

Therefore, it is an essential part of the medical examination and provides a lot of information about the patient’s condition. When the sign is persistent, then we must doubt an underlying pathological process.

Don’t forget to SHARE what is miosis with your friends and family on your social networks! 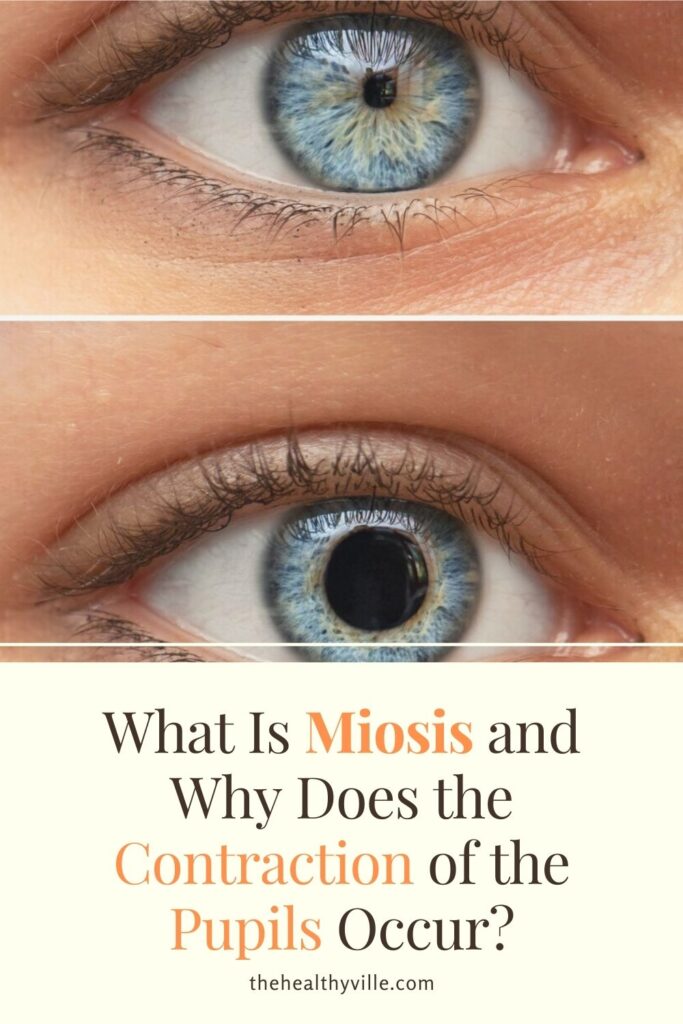 6 Side Effects of Drinking Apple Cider Vinegar in Excess