Home Health What to Do for Gastritis During Pregnancy? Can You Take Any Meds?

What to do for gastritis during pregnancy? It is important to take care of eating habits. Also, it is essential to avoid self-medication. Why?

Gastritis in pregnancy, as in any other woman who is not pregnant, is relatively frequent. However, its treatment requires more caution, since not all the medicines for its control are suitable for pregnant women.

There are a large number of drugs that are contraindicated during this stage, since they can affect the development of the baby. In addition, many others have not yet been sufficiently studied, and therefore their effect on the fetus is unknown.

Therefore, whenever you want to manage the symptoms of this condition, special care must be taken. Below, we briefly detail how to manage it if you are in the gestation period.

The term gastritis refers to inflammation of the lining of the stomach. This situation can actually be due to underlying diseases. For example, a root from an infection or from certain medications that irritate the stomach.

When it occurs during the first months of pregnancy, its symptoms become confused with those that occur at this stage. Thus, it is possible to experience nausea, vomiting, a feeling of fullness and burning in the upper part of the stomach.

In most cases, the episode occurs due to an infection. In particular, the selected bacterium Helicobacter pylori is the one behind this problem. However, it should be noted that this bacterium is present in a large part of the population, but only a low percentage of gastritis.

Meanwhile, medications associated with the development of this condition, both in pregnancy and under normal conditions, are pain relievers. Some nonsteroidal anti-inflammatory drugs, such as ibuprofen, are at high risk of producing it. The same is true with aspirin.

What to do for gastritis during pregnancy?

Before starting to talk about medical treatment, it should be noted that there are some options to avoid the symptoms of gastritis in pregnancy. They are a series of simple measures that do not involve any risk.

First, irritating foods should be avoided. For example, spicy or high-fat foods, such as fried foods. In addition, the ideal is to eat smaller meals more frequently. So the digestion will not be so heavy.

Alcohol is another risk factor for developing gastritis. In addition, we must remember that this substance is contraindicated in pregnancy. Therefore, it is essential to stop drinking.

The same goes for pain relievers. Recommendations ar eto always consult the doctor before taking any type of pain reliever at this stage. If necessary, the ideal is to replace any pain reliever with paracetamol.

There are several treatments available to control gastritis in stages other than pregnancy. First, if everything points to the cause is a Helicobacter pylori infection, doctors prescribe antibiotic treatment.

On the other hand, proton pump inhibitors are frequently used. They are medications that reduce the production of acid in the stomach, thus helping to alleviate symptoms. Some examples are omeprazole or lansoprazole.

The same is true for H2 antihistamines; reduce acid production, although its mechanism of action is different from the previous ones. In this group we find cimetidine.

Self-medication in pregnancy is dangerous to the health of the fetus. Therefore, it is always better to consult the doctor.

Many of the medications we have just identified are contraindicated in pregnancy. First, omeprazole has been shown to be teratogenic in animals. This means that there is a significant risk of causing malformations in the fetus.

Something similar happens with H2 antihistamines. Therefore, what doctors recommend in this situation are antacids, such as aluminum salts or magnesium. The truth is that gastritis is usually a mild and self-limited pathology, so it does not have to be strictly necessary to treat it.

In any case, it is best to schedule a treatment with the doctor, without falling into self-medication. Remember that any improper substance can trigger negative effects on the baby’s development. Therefore, the professional’s instructions must be followed to the letter.

Don’t forget to SHARE what to do for gastritis during pregnancy with your friends and family on your social networks! 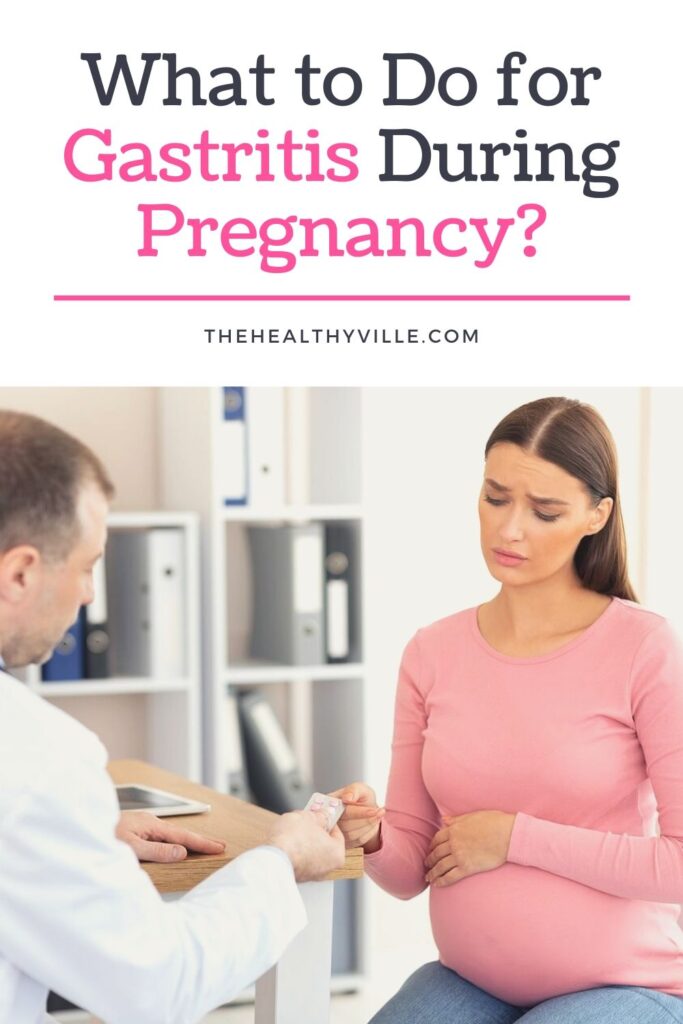